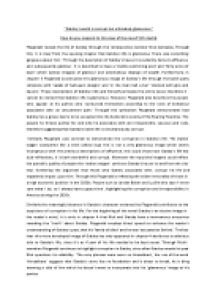 Gatsby's world is corrupt but ultimately glamorous. How do you respond to this statement?

﻿?Gatsby?s world is corrupt but ultimately glamorous.? How do you respond to this view of the novel? (21 marks) Fitzgerald reveals the life of Gatsby through the retrospective narrator Nick Carraway. Through this, it is clear from the opening chapter that Gatsby?s life is glamorous ?there was something gorgeous about him.? Through the description of Gatsby?s house it is evidently home to affluence and subsequently glamour. It is described to have a ?marble swimming pool? and ?forty acres of lawn? which evokes imagery of glamour and ostentatious displays of wealth. Furthermore, in chapter 3 Fitzgerald accentuates this glamorous image of Gatsby?s life through the lavish party complete with ?salads of harlequin designs? and ?in the main hall a bar? ?stocked with gins and liquors.? These descriptions of Gatsby?s life and himself permeate the entire novel, therefore it cannot be denied that Gatsby?s life is glamorous. However, Fitzgerald also describes the people who appear at his parties who ?conducted themselves according to the rules of behaviour associated with an amusement park.? Through this symbolism Fitzgerald demonstrates how Gatsby has a grave desire to be accepted into the hedonistic society of the Roaring Twenties. ...read more.

and is about to break, he is lying showing a side of him which he doesn?t want to incorporate into his ?glamorous? image at his parties. Alternatively, Gatsby?s ?threadbare? story could merely be to cover his less sinister but poorer lifestyle which he shared with his ?unsuccessful farm people? parents. Fitzgerald tells the reader that Gatsby was previously called ?James Gatz?, he had ?had the name ready for a long time? this shows how desperate he was to evade his old, unprosperous life and cover it with a new identity. East Egg represents the patricians in the 1920s who despised the parvenu or ?new money? bourgeois at West Egg to which Gatsby belongs, symbolic of the real social divide in the 1920s between new and old money. Consequently Gatsby?s lies to Nick about his parents were incumbent for the realisation of his dream of becoming part of a higher social class. East Egg wouldn?t have accepted him with the knowledge that he was ?new money?, however the garish displays of his wealth render his lies futile. Consequently the description of Gatsby?s past and his lies do not necessarily mean his life is corrupt. ...read more.

Therefore Gatsby?s aim to attract the love of his life is noble and pure, yet his crooked methods he employs to achieve this are repulsive to Nick and subsequently the reader. This causes an internal dilemma within the reader as emotions constantly fluctuate between approbation and revulsion. This makes the reader question the essence of Gatsby?s character and wonder if he is ultimately corrupt. Fitzgerald uses Gatsby?s ?elaborate dream? as a wider symbol of the fallacy of the American Dream. Gatsby?s obsession with his dream, shown through his constant admiration of ?a single green light? reflects the captivating energy of the American Dream over Americans during the 1920s, even still somewhat today. Moreover it shows the power of dreams and the extent people are willing to go for them, even engaging in ?bootlegging? which was an illegal activity during the 1920s. Therefore it can be considered that it is not Gatsby?s life which is corrupt, but merely the world he lives in. Furthermore it is the American Dream which Fitzgerald is suggesting to be corrupt, since it pushes people to their limits for success and glamour, creating a corrupt and immoral society. ...read more.