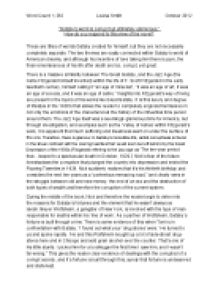 Gatsbys world is corrupt but ultimately glamorous. How do you respond to this view of the novel?

﻿Word Count: 1,262 Louise Smith October 2012 ?Gatsby?s world is corrupt but ultimately glamorous.? How do you respond to this view of the novel? These are titles of worlds Gatsby created for himself, but they are not necessarily completely separate. The two themes are easily connected within Gatsby?s world of American dreams, and although his incentive of love taking him there is pure, the final remembrances of his life after death are too, corrupt, yet great. There is a massive similarity between The Great Gatsby, and the Jazz Age (the name Fitzgerald himself invented) within the life of F. Scott Fitzgerald in the early twentieth century, himself calling it "an age of miracles", ?it was an age of art, it was an age of excess, and it was an age of satire.? Insights into Fitzgerald's way of living are present in the topics of his works like Great Gatsby. It is this luxury and degree of lifestyle in the 1920's that allows the reader to completely engross themselves in not only the emotions of the characters but the history of the influential time period around them. The Jazz Age itself was a seemingly glamorous time for America, but through investigation, and examples such as the ?Valley of Ashes? within Fitzgerald?s work, it is apparent that much suffering and bleakness went on under the surface of the era. ...read more.

On the other hand, Nick?s narrative perspective constantly compliments Gatsby, and fundamentally, the life of Jay Gatsby is glamorous and desirable, and all of the main characters have a significantly high class of living, Nick beginning the book "Whenever you feel like criticizing any one," he told me, "just remember that all the people in this world haven?t had the advantages that you?ve had," something his father told him. This quote goes on to compliment the awareness of their glamour, and how the parties Gatsby throws take advantage of the ability to flaunt this, and in reality, flaunting is the difference between wealth and glamour. From the era of Al Capone and the Bootlegger Gangsters, Gatsby clearly massively sacrifices to make his fortune, but there is no doubt that there is glamour to this lifestyle. It was the Jazz era of the 1920?s that first introduced the idolisation of celebrities into American culture. With flapper girls, and characters like Bugsy Malone affecting a reader?s perception of Meyer Wolfsheim, Gatsby?s dealings themselves become glamorous and have worth in their danger. Therefore, the method of Gatsby gaining his fortune either adds to the mystery for any characters questioning it, or becomes more glamorous to anyone who knows about how he obtained it, adding further mystique and glamour to Gatsby?s story from Nick?s point of view which experiences both cases throughout the novel. ...read more.

Also, the introduction of cinema into the culture, in itself brings glamour, and the use of a cinematic style of writing is a constant presentation of glamour in the writing. Gatsby's corrupt world is largely hidden by a cover of wealth, glamour and beauty. His mansion, lawns, beach, motor cars, speed boats, clothing, and expensive furniture create the presentation of newly built social standing, being in West Egg, nick remembering, ?there was music from my neighbour's house through the summer nights. In his blue gardens men and girls came and went like moths among the whisperings and the champagne and the stars.? Gatsby's parties, which could be read as being of theatre and presentation, suggest the front and performance Gatsby used this part of his lifestyle as. This can be read as corruption in the way Gatsby fakes his own enjoyment of his life. None of his guests go to his funeral, saying his material possessions are what they enjoy about his house, and this itself is corrupt in that there is no care for his ?glamorous side of life? whilst he is in it. Gatsby lived in both worlds, using the financial gain from one to create the other, yet both can be described as glamorous and corrupt. ...read more.