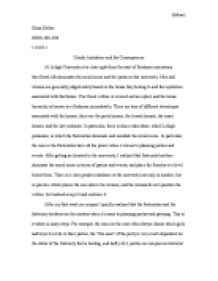 Gender Imbalance and the Consequences . After my first week on campus I quickly realized that the fraternities and the fraternity brothers are the masters when it comes to planning parties and partying

﻿Gelber Elena Gelber ENGL 001-010 11/12/11 Gender Imbalance and the Consequences At Lehigh University it is clear right from the start of freshmen orientation that Greek life dominates the social scene and the parties at the university. Men and women are generally judged solely based on the house they belong to and the reputation associated with that house. The Greek culture is revered and accepted, and the house hierarchy is known to a freshman immediately. There are tons of different stereotypes associated with the houses; there are the party houses, the Jewish houses, the smart houses, and the list continues. In particular, there is also a subculture, which Lehigh possesses, in which the fraternities dominate and mandate the social scene. In particular, the men in the fraternities have all the power when it comes to planning parties and events. After getting acclimated to the university, I realized that fraternity brothers dominate the social scene in terms of parties and events, and place the females at a level below them. There is a clear gender imbalance at the university not only in number, but in practice which places the men above the women, and the woman do not question the culture, but instead accept it and embrace it. ...read more.

The positions have reversed so quickly, and the freshmen men have transformed into typical Lehigh male students in only a matter of months. It does not seem that the girls on campus have an issue with this gender imbalance that they face on campus. It is definitely a benefit to the women that the parties are not at their houses because the house does not get trashed. And, a girl in a sorority will always have a party to go to that her other sisters are going to. Perhaps it is just accepted and is common practice, but I believe that the women on campus deserve to have more power in making decisions about Lehigh nightlife. I believe that the sisters should be able to plan their parties, and perhaps host a few parties (until the house gets trashed). Instead, the women on campus accept the routine and do not question it. It might be because all the planning and decision making has been done for them which leaves them with very little work. Or perhaps the women would rather just show up without worrying about hosting a bunch of college students and looking out for new freshmen. ...read more.

There are probably very strong women on this campus and other campuses who do not allow the fraternity brothers mandate what they do. Sadly, these types of girls are not the majority. Men should rethink their position on campus because there is too much at stake for them. They are becoming so comfortable in this domineering role that they forget it is not real life. Many of these brothers will eventually have female bosses and will not be able to treat them like a Lehigh girl. The fraternity brothers think they are better than the girls, and this sentiment will hurt them after graduation. Yes, women in the workplace are treated differently than men, but times are changing and men have accepted that. If a fraternity brother thinks he can act like he did at a Lehigh party at a job interview, he would not get the job. There are many brothers at Lehigh who are very nice and do have respect for the girls, but feel cocky around their fellow brothers. I hope that the Lehigh male community will realize that their behavior is only acceptable on campus and will learn to grow into mature, respectable men who treat women with the same dignity they treat each other. ...read more.