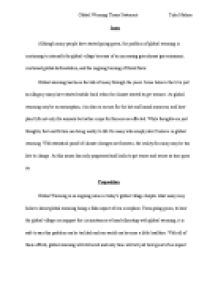 ﻿Global Warming Thesis Statement Tyler Malone Intro Although many people have started going green, the problem of global warming is continuing to intensify the global village because of an increasing greenhouse gas emissions, continued global deforestation, and the ongoing burning of fossil fuels. Global warming has been the talk of many through the years. Some believe that it is just an allegory many have started awhile back when the climate started to get warmer. As global warming may be an assumption, it is also an excuse for the hot and humid summers, and how plant life not only for animals but rather crops for farmers are affected. While thoughts are just thoughts, fact and fiction can bring reality to life for many who simply don?t believe in global warming. With statistical proof of climate changes are foreseen, the reality for many may be too late to change. As this issues has only progressed and looks to get worse and worse as time goes on. Proposition Global Warming is an ongoing issue in today?s global village despite what many may believe about global warming being a false aspect of our ecosphere. From going green, to how the global village can support the circumstances at hand allocating with global warming, it is safe to say this problem can be tackled and our world can become a little healthier. With all of these efforts, global warming will still exist and only time will tell just how great of an impact society will have if steps are taken. ...read more.

Carbon Dioxide is a gas at standard temperature and pressure and exists in Earth's atmosphere. It is one of the vital gasses that we as humans need to intake in order to breathe. On the other hand, Methane is another greenhouse gas that may not be so common. Methane is a gas that is used to produce energy. This gas is flammable and can be found throughout the earth in various places. Carbon Dioxide can come from a numerous things. Carbon Dioxide can come from fossil fuels and deforestation. Carbon dioxide is produced during respiration by all animals, fungi and microorganisms that depend either directly or indirectly on plants for food. When you breathe in oxygen from the air around you, it travels through your body and is converted to carbon dioxide. This happens by the time you exhale. Deforestation is known as cutting down trees. When you cut down trees, Carbon Dioxide gets released into the air which is eventually inhaled by a person of the global village. Methane on the other hand is a totally different kind of greenhouse gas. This mainly comes from cattle and Rice Paddies along with nitrogen oxides that mainly originate from farming. The information about Methane can let us know that global warming has been an ongoing issue by how it is produced. The video: Guns, Germs and Steel is a prime example of how farming back in the day could have led to some of the effects of global warming. ...read more.

With this being said, it is safe to say that the reasoning behind your accusations about CO2, fossil fuels and how taking care of our ecosystem will help global warming isn?t exactly true. This is because global warming doesn?t really exist but rather a made up accusation led on by many scientists with little to no scientific data to back up their evidence. Global warming is a very complex complicated issue. The rate of temperature change may only be predicted. Still, the global village is taking action to possibly reduce its contribution to the CO emissions and also to reduce the pollution. If we are mistaken and later will be discovered that humans contributed to the global warming insignificantly, our children will have a cleaner and safer planet to live on, anyway. On the other hand, if nothing is going to be done, present generation will leave to the decedents both bad environment and bad economy, as the resources begins to exhaust. I believe that global warming is an ongoing problem in the global village. If actions are not taken to slow down the process of global warming, the earth is only going to get hotter and hotter until wildlife and crops start to suffer. Although many people have started going green, the problem of global warming is continuing to intensify the global village because of an increasing greenhouse gas emissions, continued global deforestation, and the ongoing burning of fossil fuels. These problems are the source of global warming and need to be looked at in all seriousness if this problem is actually going to digress. ...read more.