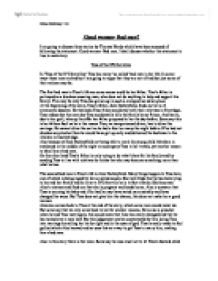 Good women- Bad men? I am going to discuss three stories by Thomas Hardy which have been accused of following the statement: Good women- Bad men. I shall discuss whether this statement is true to each story. Tess of the D'Urbervilles In 'Tess of the D'Urbervilles' Tess has many 'so called' bad men in her life. In some ways these men are bad but I am going to argue that they are not all bad but just some of their actions may be. The first bad man in Tess's life we come across could be her father. Tess's father is portrayed as a drunken uncaring man, who does not do anything to help and support his family. This may be why Tess has grown up in such a cramped run down place. At the beginning of the story, Tess's father, Jack Durbeyfield, finds out he is of aristocratic descent. He then asks Tess if she would stay with their relatives in Tantridge, Tess refuses but the next day Tess accidentally kills the family horse Prince. And has to, due to her guilt, take up the offer her father proposed to her the day before. Some say this is her fathers fault as he is the reason Tess, an inexperienced driver, has to drive the carriage. ...read more.

But this certainly seemed to prove her strange powers. In this story Farmer Lodge is portrayed to be a bad man as he bedded a woman, who then had his child, and then dismissed them. He then remarried a beautiful young woman but as the years of their marriage passed by he started to lose interest in her. The first accusation I have made is that he has had no contact with his son over the years before we meet the boy in the story. The boy obviously knows that Farmer Lodge is his father as that is what he calls him. So maybe there has been some communication between them, perhaps even some bonding. But from the story I can not tell this. This would not make him a practically bad man. The way he ignores the boy when his new wife arrives suggests that he does not wish to communicate with the boy or Rhoda any longer, which makes him a bad man. The fact that he has not told his wife the fact that he has a child also makes him a bad man. The second accusation I have made about Farmer Lodge is that as his marriage lengthens his interest in his wife decreases. ...read more.

On the other hand he may not wish for his mother to remarry simply because he does not wish to see her with any other man than his father. It may be hard for him to let go of his father, as they were obviously much closer to each other than Sophy and her son. But b y not addressing the problem he has with his mother remarrying he is making his mothers life not worthwhile and making himself look like a bad man. I do not think there are any other particularly bad men in this story. I think the Parson truly loved his wife and it is a shame he died. I also think that Sam Hobson was a good man too as he waited for Sophy until she died. All in all I think the theory good women: Bad men, is not particularly true to each of these stories. In 'Tess of the D'Urbervilles' and 'The Withered Arm' the women are just as bad as the men, it may be because of their naivety but they are still not particularly good. The only story that can slightly be true of this accusation is 'The Sons veto', although not all the men are bad. ?? ?? ?? ?? Celise Galloway 11x1 ...read more.