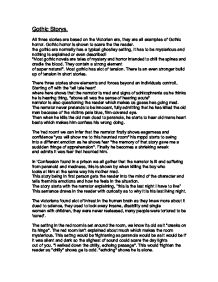 Gothic Storys. All three stories are based on the Victorian era, they are all examples of Gothic horror. Gothic horror is shown to scare the the reader. the gothic era normally has a typical ghostley setting, it has to be mysterious and nothing is explained or even described! "Most gothic novels are tales of mystery and horror intended to chill the spines and cradle the blood. They contain a strong element of super natural". Most gothic has alot of tension. There is an even stronger build up of tension in short stories. There three stories show elements and forces beyond an individuals control!, Starting off with the 'tell tale heart' where here shows that the narrator is mad and signs of schizophrenia as he thinks he is hearing thing, "above all was the sense of hearing acute" narrator is also questioning the reader which makes us guess hes going mad. ...read more.

This story being in first person gets the reader into the mind of the character and tells them his emotions and how he feels in the situation. The story starts with the narrator explaining, "this is the last night I have to live" This sentence draws in the reader with curiosity as to why it is his last living night. The victorians found alot of intrest in the human brain as they knew more about it dued to science, they used to lock away insane, disability and single women with children, they were never realeased, many people were tortured to be 'cured'. The setting in the red room is set around the room, we know its old as it "creaks on its hinge". The red room isn't explained about much which makes the room mysterious. This settng would be frightening as paranoia would be as it would be if it was silent and dark so the slighest of sound could scare the day lights out of you. ...read more.

Confession found in a prision is set in a prison but the murder was set in the house. The short story 'Confessions found in a prison' shows the narrator to be a paranoid and obsessive character, this is shown when the narrator watches the spot where the child is murdered for a whole day. The reader can also see his conscious playing on his mind as he dreams that he did not kill the child, but wakes in 'dreadful agony' realising that he had murdered the child. I Think 'confessions found in a prison' makes the most fear for the reader as a child is murdered by his guardian, this story is very disturbing as the murder is made by somebody who is supposed to love and care for the child. These three short stories, if modern to this day, could still create fear in many readers today. Many books with the same storylines are still popular with today's generation and are just as spine chilling and blood curdling as they were in the Victorian ...read more.