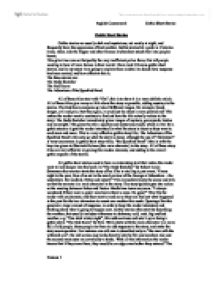 Gothic Short Stories Gothic stories are usually dark and mysterious, set mostly at night, and frequently have the appearance of bad weather. Gothic stories hit a peak in Victorian times, when Jack the Ripper and other famous lawbreakers struck fear into peoples hearts. This grim time was not helped by the very inefficient police force, this left people wanting to hear of more heroes in their world. I have read 3 famous gothic short stories, and in my essay I am going to explore them in detail to decide how suspense has been created, and how effective this is. The three stories are: The Body-Snatcher The Red Room The Adventure of the Speckled Band. All of these titles start with "The"; this is to show it is a more definite article. All of these titles give away as little about the story as possible, adding mystery to the stories. The Red Room conjures up lots of different images, for example, blood, danger, evil and pain. But then again, it could just be about a room painted red! This makes the reader want to continue to find out how the title actually relates to the story. ...read more.

Gothic stories often start by describing the weather; this usually includes references to darkness, cold, mist, fog and bad weather, e.g. "One dark winter night", this adds eeriness and sets it up as being a gothic story. "The Red Room" by H.G. Wells starts with the main character in a room full of old people, these people are there to add suspense to the story, and make the story seem spookier. For instance one old man is described only as "the man with the withered arm", the old woman just looks directly into the fire and nowhere else and the second mans eyes are covered by a shade. With all this information the reader knows that if they were there, they would be on edge even before they entered "The Red Room". In "The Adventure of the Speckled Band" the start does not sound like a gothic story at all, unlike the pervious two stories, it does not aim at making suspense or tension but describes past cases and gives you some background information on the main characters before the reader gets into the story. ...read more.

The setting plays key part in gothic short stories, it is one of the main features to create suspense and tension. These setting use many ways to achieve their task. For instance they commonly include the use of the weather and light. In "The Body Snatcher" this is used very effectively. E.G. "When at last the blue flickering flame began to grow and shed a misty brightness around the cart, it became possible for the two young men to see each other and the thing they had with them. The rain had moulded the sacking to the outlines of the body underneath." Most of this story is set in darkness and rain; this makes the story a lot more eerie and lets the ready know that it is a gothic story. In "The Adventure of the Speckled Band" the story is also set at night. E.G. "A moment later we were out on the dark road, a chill wind blowing in our faces, and one yellow light twinkling in front of us through the gloom to guide us on our sombre errand." I think this is a very good sentence about the setting; it sets the scene, and tells the reader about the bad weather, which often gives the impression that bad things are soon to happen. ...read more.