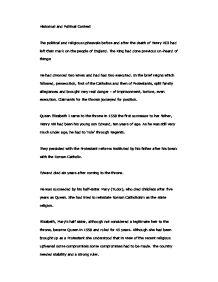 The political and religious upheavals before and after the death of Henry VIII had left their mark on the people of England. The King had done previous un-heard of things:

He had divorced two wives and had had two executed. In the brief reigns which followed, persecution, first of the Catholics and then of Protestants, split family allegiances and brought very real danger - of imprisonment, torture, even execution. Claimants for the thrown jockeyed for position.

Queen Elizabeth I came to the throne in 1558 the first successor to her father, Henry Viii had been his young son Edward, ten years of age. As he was still very much under age, he had to 'rule' through Regents.

They persisted with the Protestant reforms instituted by his father after his break with the Roman Catholic.

Edward died six years after coming to the throne.

He was succeeded by his half-sister Mary (Tudor), who died childless after five years as Queen. She had tried to reinstate Roman Catholicism as the state religion.

Elizabeth, Mary's half sister, although not considered a legitimate heir to the throne, became Queen in 1558 and ruled for 45 years. Although she had been brought up as a Protestant she understood that in view of the recent religious upheaval some compromises some compromises had to be made. The country needed stability and a strong ruler.

Her life had been in danger before she became Queen and there were the inevitable conspiracies to usurp her position.

The tragic figurehead of one of these and the object of Elizabeth's suspicion and jealousy for many years was Mary, Queen of Scots; Elizabeth at first kept her under arrest but eventually had her executed in 1587.

Late in her reign, in 1601, the Earl of Essex, formerly her favorite, made his bid for power. He failed in his attempt to cause a popular up rising, was imprisoned and executed.

It is not difficult to trace this atmosphere of suspicion and treachery in Hamlet, nor the reassuring promise to royalty contained in the suggestion at the end of the play that strong and humane rule will be reasserted.

There were also serious threats from abroad. In 1588 Phillip II of Spain sent the Armada, a large fleet of ships, sailing up the Channel in an attempt to conquer England by force.

Another foreign threat was marriage. Elizabeth constantly resisted attempts by her counselors to contract any politically advantageous marriage and she died unmarried, naming James, her Scottish cousin, already established for many years as King in Scotland, as her successor.

Elizabeth I built on the foundations laid by her father and grandfather until her power, the power of the Crown, was almost unquestioned.

To help achieve the security which she and the country, needed it was important to encourage an articulate and educated aristocracy.

Education and in particular classical scholarship assumed a fresh importance.

In the grammar schools - it is assumed that Shakespeare attended the Stratford Grammar school- Latin Language and literature were studied; prose and verse, composition, rhetoric, orations and declamations.

Much was learnt by heart and in the upper school Greek was added. Shakespeare's knowledge of the classical theatre, poetry and legend is evident throughout his whole body of work.

How does this relate to Hamlet?

The Player's speech, which Hamlet has remembered, is part of the Dido and Aeneas story, the sack of Troy and the slaying of King Priam.

Also, Hamlet and Horatio have been fellow-students at the University of Wittenberg. The others, to address the ghost, call upon Horatio. Hamlet clearly wanted to return to Wittenberg, to turn his back on the whole situation at the castle, and possibly to become a perpetual student and scholar - until his father demands the revenge which he is unfitted to deliver.

There was vitality; a fresh interest in foreign countries in the sixteenth century and exploration by sea had led to an increase in foreign trade.

European foreign countries hardly seemed far away. Laertes lives very happily in Paris, away from his father's influence. Hamlet is casually packed off by his uncle to a planned death in England. There was an extension of experience and an opening up to fresh influences, which included a new vocabulary of classical and foreign words.

The Elizabethan age was establishing a feeling of national community and confidence. At the same time an increase in prosperity and a raising standard of living for many. This prosperity was also reflected in the newly built theatres and the audiences who flocked to entertainments of all kinds

This is not to say that dissent and uneasiness did not exist. There will still disputes over religion and new ideas can be worrying as well as exciting.

Persecution of religious minorities of the mainland caused a large influx of refugees from France and the Netherlands. It is also important to remember that some of the 'entertainments' mentioned above were public executions. Bloodthirsty pastimes such as bull- and bear- baiting were popular.

The streets were filthy and away from the main thoroughfares, in the poorer parts of the city, they resembled open sewers and rubbish dumps. The plague, spread by black rats, struck in 1592 when it ravaged the city for two years, and again in 1603, wiping out whole families and forcing those Londoners who could afford to do so to flee to the country. Theatres and all public places of entertainment were closed down.