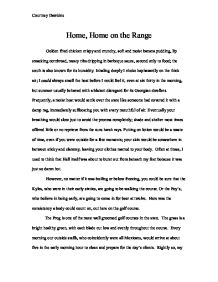 Home, Home on the Range

Home, Home on the Range Golden fried chicken crispy and crunchy, soft and moist banana pudding, lip smacking cornbread, meaty ribs dripping in barbeque sauce, second only to food; the south is also known for its humidity. Inhaling deeply I choke haphazardly on the thick air; I could always smell the heat before I could feel it, even at six thirty in the morning, but summer usually behaved with a blatant disregard for its Georgian dwellers. Frequently, a moist heat would settle over the state like someone had covered it with a damp rag, immediately suffocating you with every mouthful of air. Eventually your breathing would slow just to avoid the process completely; shade and shelter most times offered little or no reprieve from the suns harsh rays. Putting on lotion would be a waste of time, even if you were outside for a few moments; your skin would be somewhere in between sticky and clammy, leaving your clothes matted to your body. Often at times, I used to think that Hell itself was about to burst out from beneath my feet because it was just so damn hot. However, no matter if it was boiling or below freezing, you could be sure that the Kyles, who were in their early sixties, are going to be walking the course. ...read more.

My intentions were meaningful and honest, and honestly I didn't think anyone would know the difference. I was always trying to help, but I was more so in the way. Despite her cursing and yelling my name, she was still my favorite person out of the whole establishment. She never held back her annoyance or anger with me; in a way it reminded me a lot of my mom, which is probably why I took such affection to her. "Eu!" I'd roar her name and beam contentedly like a child playing peek-a-boo, wanting to believe that this moment would never abscond, and I'd always be within my comfort zone, here...on the golf course...in Georgia. I gaze up at the sheetrock ceiling (as if it would have the answer) and wonder why leaving home after nineteen years feels so good, but coming back after one month or one year feels even better? I write in Spanish on the outside staff's lunch boxes like I've always done for the past two years. Eunice would always encourage me to speak to them, but I was afraid that I'd make a mistake, and they would laugh at me. ...read more.

They talk about how I backed the brand new food cart into a tree while golfers were at play, and was dully written up. Or about when I mistook the golf balls on the range as Easter eggs; that human err is their favorite and to prove it, they laugh louder, longer and harder. All my antics were recreated and reenacted, as if I didn't live the experiences myself. Of course I didn't mind their teasing; they were my foster family, and I was going to miss them. Like an avid reader is reluctant to come to the conclusion of their favorite novel, I too am loath to say goodbye to this exciting chapter of my life, but at the same time am anxious to see what life has in store next. The sun descends and our shadows grow taller and leaner; we know that it is time to go. After hugs and kisses, once promises to write and call had been made, the last car pulls out of the parking lot. I stand still for a time, remembering how I began here as an unsure, lost, and clumsy girl. Now I was leaving as a confident, ambitious, clumsy young lady. I stop to appreciate experience and all that she has taught me. ?? ?? ?? ?? Courtney Dawkins ...read more.