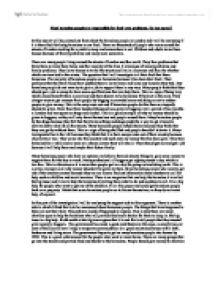 Most homeless people are responsible for their own problems. Do you agree?

In this essay I will be pointed out facts about the homeless people in London and I will be analysing if it is there fault for being homeless or our fault. There are thousands of people who roam around the streets of London looking for a patch to sleep and somewhere to eat. Children and adults leave there houses because of family problems and many more scenarios.

There are many people living around the streets of London and the world. They face problems that force them to leave there home and the majority of the time it is because of money problems and family problems. They leave houses to travel the streets and live in alleyways and face the whether which can turn bad in the winter. The question that I will investigate is it their fault that there homeless. The majority of homeless people are homeless because it has been their fault. Their problems that they have faced have pushed them to leave home and loose any luxuries they had. Any homeless people do not even try to gain a job to support them in any way. Many people think that they should get a job as many do have some qualifications that can help them. This is a sign of being lazy which cannot benefit them in any way and they deserve to be homeless if they act in this way. They clanger ways to get moneys from people by begging in crowded areas and doing an act to endure people to give money. This is the easy route out and if homeless people do this then no simperfy should be given. More than three hundred thousand was given to beggars over a period of two months n London and was spent on drugs and alcohol. This is a good example of why no money should be given to beggars, as they will only harm themselves and people around them. Many homeless people by the drugs because they fell that they have nothing and drugs might be a way to get a boost to survive day-to-day life on the streets. Many homeless people refuse shelter because they think that they can get by without them. This is a sign of being shellfish and people shouldn’t tolerate it. Many immigrants flee to the UK because they think that it is their escape route out of their country because of poverty or war. They come into this country and such onto our money that has been give. They stay homeless for a while and as soon as a chance comes they will take it. They should get out and get a job because it will help them and maybe their future family.

Many homeless people who have no options available to them do drastic things to gain some money to support them for the day or week. Many professional all beggars get eighty pounds a day, which is tax-free. This is ridiculous as it is more than people get in a day for going out and doing work. This is a prime example as to why money shouldn’t be given to them. Some homeless people who want to get out of the situation cannot because they are too lazy to find out information about numbers to call for help such as childline and social services. There is an magazine that can help the homeless it is called the big issue and it aim to help the homeless by telling them what to do and numbers to call. It is a big help for people who want to get out of the situation. It is a free paper and could get homeless people back on a property. I think that some homeless people are to blame themselves, as they do not want help of any sort.

In this part of the investigation I will be analysing the support side to this argument. There is another side to which I think that is to be announced about homeless people. The things that have happened to them are not their fault. This problem could of happened to anyone. This is why there are many charities open to help the homeless who will provide food and a shelter for them to sleep in. the big issue is a big help. Keith smith at thebig issue agrees that it is not fair to tell people that they mustn’t give money to beggars.  The government has made a good contribution to this case, as ninety two per cent of families are now living in tempary accommodation in a good maintained house with a bath, bedrooms and living room. The government hopes to get as many homeless people into homes by 2010. This is a great achievement for the people who want to move home. There are many groups that go into the streets and provide food and shelter to the homeless. People should give money to charities because it will have more of an effect as if you give it to the homeless in person they could just by drugs or alcohol with it.

I think in my judgement that homeless people are not to blame, as they cannot help was has happened to them. They need help, which is provided by different services. A small amount of money is all that is needed to support them. With a new priminister in power I think that he will tackle the problem in a quick way. He could bring the time from 2010 to now which could help the homeless even more.