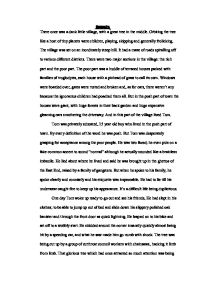 Honesty There once was a dank little village, with a great tree in the middle. Orbiting the tree like a host of tiny planets were children, playing, skipping and generally frolicking. The village was set on an inordinately steep hill. It had a maze of roads spiralling off to various different districts. There were two major sections in the village: the rich part and the poor part. The poor part was a huddle of terraced houses packed with families of troglodytes, each house with a pinhead of grass to call its own. Windows were boarded over, gates were rusted and broken and, as for cars, there weren't any because the ignoramus children had poached them all. ...read more.

He had to lie till his underwear caught fire to keep up his appearance. It's a difficult life being duplicitous. One day Tom woke up ready to go out and see his friends, He had slept in his clothes; to be able to jump up out of bed and slide down his slippery polished oak banister and through the front door as quick lightning. He leaped on to his bike and set off to a wobbly start. He skidded around the corner insanely quickly almost being hit by a speeding car, and what he saw made him go numb with shock. The tree was being cut up by a group of cutthroat council workers with chainsaws, hacking it limb from limb. ...read more.

The young bobby ran over to him and slapped on the handcuffs with a satisfying click, to the council worker who he hauled off to the local police station. Tom sitting there, not believing his luck, decided to go home for a drink. He sat down at the ridiculously large dining table and poured himself a pint of flat coke. His heart was still pounding; pounding so hard that it felt like it was going to explode. He had almost been caught attacking another man. If he had got a criminal record his parents would disown him, he would get kicked out of his school and would go to juvenile prison. He got up and walked over to his dilapidated old bike and wearily rode slowly into the sunset vowing to be honest with himself from now on. ...read more.