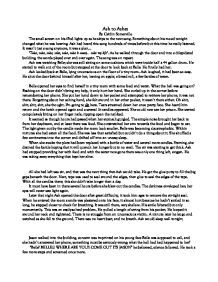 Ash to Ashes By Caitlin Somerville The small screen on his iPod lights up as he skips to the next song. Something about his mood tonight changed what he was hearing. Ash had heard this song hundreds of times before but this time he really listened. It wasn't just a song anymore, it was a plan... "Take, take, take, take, take, take it away... take my life". As he walked through the door and into a dilapidated building, the words played over and over again. The song was on repeat. Ash was watching Belle; she was still sitting on some cushions which were inside half a 44 gallon drum. He started to walk out of the room but stopped at the door to look back at Belle. He finally had her. Ash looked back at Belle, lying unconscious on the floor of a tiny room. Ash laughed, it had been so easy. He shut the door behind himself after her, leaving an apple, a bread roll, a few bottles of water. Belle opened her eyes to find herself in a tiny room with some food and water. What the hell was going on? Bashing on the door didn't bring any help, it only hurt her hand. ...read more.

Later that night Ash opened the door after great difficulty, it took him ages to remove the air-tight seal. When he entered the room a smile was plastered onto his face, it almost hurt because he hadn't smiled in so long, he stepped closer to check for breathing. It was still there, very shallow. His smile faltered but only momentarily. This was an easily-solved problem. He pulled a length of string from his pocket. He looped it around her neck and tightened. There is no struggle from an unconscious victim. A minute later he let go and watched as she fell to the ground. There was no heart beat, and no breath. Ash would sleep well tonight. Jason walked into the building, concern was imprinted on his young face Belle was supposed to call, and she hadn't answered her phone, something must be seriously wrong; what the hell had had happened to her? "Belle? BELLE!!! WHERE ARE YOU?! COME OUT ITS JASON" he bellowed, silence followed. He took a few more steps and screamed once more. "BELLE, MAKE A NOISE IF YOU CAN HEAR ME!!!" again, there was no response. He came across a door, it was the only one still attached to the door frame, he approached it warily and placed his warm hands on the cool metal door handle in an attempt to open the door, surprisingly it was locked. ...read more.

Ash left his sanctuary knowing that soon, Jason will be stiff and cold, just like Belle. Ash looked back to see the look of acute horror tattooed across Jason's face. "Burn the evidence of my existence, Clear the ashes on the ground" the song changes again. Ash walked back to his sanctuary and stood in the middle of the room and looked around for one last time. He shivered with anticipation, so much so that he struggled to open the first container. Once the lid was off he emptied over himself, petrol flowed over his body. He did the same with the second container; the smell in there was asphyxiatingly strong. He picked up the lighter from the table and flicked the flint, it didn't spark. He tried a second time, and again there was no spark. Third time lucky, third time lucky, third time lucky Ash repeated in his head, nauseated by his failure. He placed his thumb on the flint for a third time; he can't fail, not again. He quickly pushes his thumb down on the striker, a spark appeared he pressed on the gas release valve; a flame emerged from the pilot light, the petrol caught alight. He was in ecstasy, this was perfection. Screaming with joy, the flames engulfed the room. This was his end. His own personal little hell. ...read more.