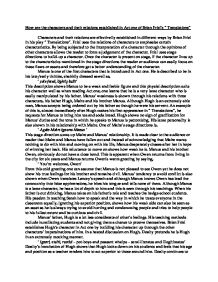 How are the characters and their relations established in Act one of Brian Friel's &quot; Translations&quot;.

How are the characters and their relations established in Act one of Brian Friel's " Translations" Characters and their relations are effectivelly established in different ways by Brian Friel in his play " Translations". Friel uses the relations of characters to emphasise certain characteristics. By being subjected to the interpretation of a character through the opinions of other characters allows the reader to form a judgement of the character. Friel uses stage directions to build-up a character. Once the character is present on stage, if the character lives up to the characteristics mentioned in the stage directions the reader or audience can easily focus on these flaws or assets and therefore get a better understanding of the character. Manus is one of the first characters that is introduced in Act one. He is described to be in his late/early thirties, shabbily dressed aswell as, ' pale-faced, lightly built' This description shows Manus to be a weak and feeble figure and this physial description suits his character well as when reading Act one, one learns that he is a very lame character who is easily manipulated by his father. Manus' weakness is shown through his relations with three characters, his father Hugh, Maire and his brother Manus. Although Hugh is an extremely able man, Manus accepts being ordered out by his father as though he were his servent. An example of this is, almost immediately after Hugh makes his first appearance in " Translations", he requests for Manus to bring him tea and soda bread. Hugh shows no sign of gratification for Manus' duties and the tone in which he speaks to Manus is patronising. ...read more.

on his own admission- only English; and to his credit he seemed suitabley verecund ' From Hugh's description, one can understand that Lancey is a humble character that only speaks English and only speaks at all when it suits him. This makes Lancey out to be an arrogant character as he does not appriciate the language of the country that he is in nor does he come across as a friendly, warm character. Lancey's character is built-up further through stage directions. He is described to be a very organised, militaristic man who is excellent at his job but has weak communication skills with people, ' especially civilans, especially these foreign civilans. His skill is deeds, not words' Lancey is shown to believe that as he is English and in the army he has the right to look down on other people that are not to his rank. Therefore is he shown to be arrogant and not a people's person and when Lancey finally appears in the play he lives up to all these characteristics as he treats the Irish people as though they are stupid and insignificant. Lancey seems to represent the stereotypical Englishman that many Irish people resented and had good reasons for. Friel perhaps introduces Lancey so that the reader understands why the Irish resented the English so much and the Irish characters would therefore receive sympathy from the reader or audience. Friel however also introduces Lieutenant Yolland who has a contrasting character to Lancey. Yolland is not arrogant like Lancey and neither is he militaristic as he is described as, ' A soldier by accident ' It is important that Friel mentions that Yolland joined the army by accident as Yolland should not have any association with the harsh,strong image of the army. ...read more.

The importance of Friel making the reader aware of the different relations that a character has is essential in the understanding of the character. It can show them to be weak or strong and determines part of the character. Stage directions are also extremely valuable to forming a judgement of a character as their physical appearance and values that may not come across in dialogue are emphasised and therefore the reader has a greater understanding of the character. Friel ends act one with probably the most conclusive stage directions in the play. ' Manus watches Owen move confidently across the floor, taking Maire by the hand and introducing her to Yolland. Hugh is trying yo negotiate the steps. Jimmy is lost in a text. Doalty and Bridget are reliving their giggling Sarah is staring at Manus ' This end to the act sums up how each character should have been interpreted in Act one. Manus, wary of his brother and focusing on Maire shows him to be passive and reluctant to move on. Hugh is seen as drunk and unable to get to where he wants in life. Jimmy Jack is lost in his own world and in turn lost touch with reality and will get no where in life. Doalty and Bridget are having fun and adding light humour to the scene. Sarah is lusting after Manus, unable to confess her feelings for him and is stuck on a man that is lame thus rendering her a failure in life. Friel adds this last stage direction to ensure that the reader or audience have a complete understanding of the characters and their relations in his play " Translations". ...read more.