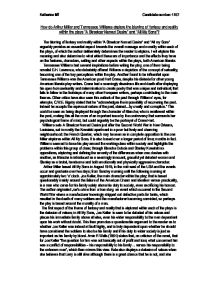 How do Arthur Miller and Tenessee Williams explore the blurring of reality and fantasy within the plays A Streetcar Named Desire and All My Sons?

How do Arthur Miller and Tennessee Williams explore the blurring of fantasy and reality within the plays "A Streetcar Named Desire" and "All My Sons"? The blurring of fantasy and reality within "A Streetcar Named Desire" and "All my Sons" arguably provides an essential aspect towards the overall message and morality within each of the plays, of which the author deliberately determines the reader to explore. I will explore this meaning and also determine to what extent these are of importance and the effects they have on the features, characters, setting and other aspects within the plays, both American literate. Tennessee Williams had several inspirations before writing the play, one of them being novelist D.H. Lawrence, who debatably offered Williams a depiction of the concept of sexuality; becoming one of the key perceptions within the play. Another found to be influential upon Tennessee Williams was the American poet Hart Crane, despite his distaste for other young American literate play-writers. Crane had a seemingly disastrous life and death after displaying his open homosexuality and determination to create poetry that was unique and individual; that fails to follow in the footsteps of many other European writers, perhaps contributing to the main themes. ...read more.

Miller portrays this differing from Williams, and is rather unique in All My Sons as Kate holds a practical set of values to surround herself with the dream of perfect family life, which can only stand because of the view she upholds about Larry Keller; that his physical form is still in existence. Whilst the final scene is arising, Kate is still cheery and the atmosphere is slightly uplifted due to her presence, e.g. "Listen, to hell with the restaurant! I got a ham in the icebox, and frozen strawberries, and avocados", all of which are symbols of happiness and pleasure; still portraying the veneer she and Joe live within. She also uses another story that has famously arisen in the papers and she uses that story to prolong her perceiving of her perfect life and to compare with her own; "There was half a page about a man missing even longer than Larry, and he turned up from Burma." Noticeably, Miller also displays this view through the character of Joe Keller. When Kate informs him that Chris may be angered when he realises Joe's past actions, he is surprised and says "He would forgive me! ...read more.

Arguably, Joe in his own mind, is acting on the 'right' thing based upon his values. The setting also displays the fine line between fantasy and reality within each of the plays. Williams achieves this by firstly lining the flats upon one another, showing a reflection of Stanley and Stella's relationship, which could relate to the fantasy aspect of both of their relationships in which the foundation relies upon desire. New Orleans contrast with Belle Reve displays that Blanche's past is unrecoverable and because of the exact opposition between the two settings, this highlights her fantasy lifestyle; "They mustn't have understood - what number I wanted..." Miller also demonstrates this theme through the original setting, as highlighted by a critic named Graham J. Northrup, stating that the original set included "'tall planted poplars'... which created a secluded atmosphere.' The physical separation from their neighbours is the echo of Joe and Kate's desire to hide the truth of their actions from the community." The setting is also to displays the focus of deluding others to succumb and believe their veneer of the idealistic perfect lifestyle; the status Joe attempts to gain within the community. ?? ?? ?? ?? Katherine Iliff Candidate number: 4102 ...read more.