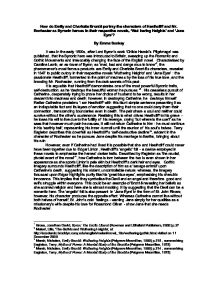 How do Emily and Charlotte Bront portray the characters of Heathcliff and Mr. Rochester as Byronic heroes in their respective novels, Wuthering Heights and Jane Eyre?

How do Emily and Charlotte Bront� portray the characters of Heathcliff and Mr. Rochester as Byronic heroes in their respective novels, 'Wuthering Heights' and 'Jane Eyre'? By Emma Sankey It was in the early 1800s, after Lord Byron's work 'Childe Harold's Pilgrimage' was published, that the Byronic hero was introduced to Britain, sweeping up the Romantic and Gothic Movements and irrevocably changing the face of the English novel. Characterised by Caroline Lamb, an ex-lover of Byron, as 'mad, bad and dangerous to know'1, the phenomenon's most famous products are Emily and Charlotte Bront�'s characters, revealed in 1847 to public outcry in their respective novels 'Wuthering Heights' and 'Jane Eyre': the passionate Heathcliff, tormented to the point of madness by the loss of his true love, and the brooding Mr. Rochester, running from the dark secrets of his past. It is arguable that Heathcliff demonstrates one of the most powerful Byronic traits, self-destruction, as he 'destroys the beautiful woman he pursues'2 . His ceaseless pursuit of Catherine, desperately trying to prove her choice of husband to be wrong, results in her descent into madness and death; however, in destroying Catherine, he destroys himself. Earlier Catherine proclaims 'I am Heathcliff' with this blunt simple sentence presenting it as an indisputable fact and its layers of emotion suggesting that no one could deny them their connection, transcending boundaries even in death. ...read more.

Rochester demonstrates the opposite as he shuns his right to society at the beginning of the novel, imposing isolation upon himself and creating barriers by locking himself in his study. However, at the end of the work his blindness forces him into isolation, with the description of Ferndean's 'close ranked trees' representing how he is trapped in his perpetual darkness. He then marries Jane, flouting Victorian social convention due to their class divide, showing his rejection of society's values. A further Byronic trait manifested by the characters is mysterious pasts. Nelly creates questions as to Heathcliff's rightful place in the Earnshaw family by describing his history as like 'a cuckoo's'. These birds steal the nests of others, suggesting that Heathcliff has obtained a position that was not rightfully his and pushed others out in the process. This point is emphasised as Heathcliff was named after a dead first son, suggesting a right to inheritance and status under Georgian custom, which could be seen as him stealing a position that is truly Hindley's. The mystery continues with Heathcliff's return after fleeing the Heights, bringing with him his new money and status which unbalances the social structure. No explanation is given for his new wealth but due to newly-wealthy capitalists and industrialisation, money, rather than family, was quickly becoming the key to status. ...read more.