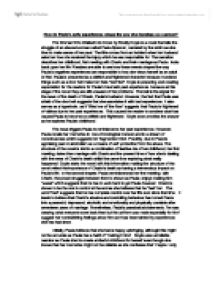 How do Paulas early experiences shape the way she develops as a person?

How do Paula's early experiences shape the way she develops as a person? The Woman Who Walked into Doors by Roddy Doyle is a novel that tells the struggle of an abused woman called Paula Spencer, narrated by the victim as she tries to make sense of her past. The title comes from an incident when her husband asks her how she received the injury which he was responsible for. The narration describes her childhood, first meeting with Charlo and their marriage as Paula looks back upon her life. Readers are able to see how these events shaped the way Paula's negatives experiences are responsible to how she views herself as an adult. At first, Paula is presented as a skittish and frightened character because mundane things such as a door bell make her feels "terrified". Doyle is preparing and creating expectation for the readers for Paula's traumatic past experiences because at this stage of the novel they are still unaware of her problems. The bell is the signal for the news of the death of Charlo, Paula's husband. However, the fact that Paula was afraid of the door bell suggests that she associates it with bad experiences. It also serves as a hyperbole, as it "lifted me off the floor" suggests that Paula is frightened of visitors due to her past experiences. This caused the reader to wonders what has caused Paula to become so skittish and frightened. ...read more.

In a way Paula's social background could contribute to how she develops as a person as their judgemental ideas create a dichotomy that forces Paula to choose between being a "slut" or a "tight bitch" which is a sexualisation of girls in a judgemental environment where women still objectified in 1970's. It is possible that Paula goes with Charlo because she wants to escape from this label. She feels that being with Charlo makes her feels like she is "someone" which suggests that Charlo is giving Paula an identity that had been taken away from her when she started High School. This would affect Paula's later relationships as she has been treated as a possession and causing her to lose her romantic ideology as the contrast between the movie Dirty Dancing's imagination with her love life emphasises her horrible reality. Furthermore, Paula had a tough time growing up as she had to develop too quickly. This is due to her experience at school as she "ended up wanking a good-looking thick in the back of the classroom" because she needs to make a "name" for herself. This shows that Paula's life has not been easy; she has to do unpleasant things to get what she wants. Therefore, she sees growing up as a bad thing suggested by Paula's description of Nicola's growing up as being "robbed" from childhood. This could be because as a child, Paula's mother didn't reassure her that her development is normal as she believed that her mother was going to "lose her temper". ...read more.

I forgot. I needed him." Doyle uses short sentences to mirror the short, sharp bursts of violence experienced throughout Paula's marriage and it also shows Paula who is not educated and is not comfortable with fancy words, struggling to tell her story, to make herself understood to people who are cleverer than she is. People who will surely dismiss her, saying she should have left her abusive husband at the first slap, and will fail to understand the 'love him/hate him' dichotomy that prevents some victims of domestic violence from walking away from their abusers. Furthermore, it also suggests that Paula doesn't want to talk about it as it is too painful for her and she doesn't want to go into details about her bad experiences. For example, when Charlo "killed" all of her, this might be one of the reasons why Paula is such a jumpy person as she tries to block out too many bad memories. Nonetheless, Doyle's purpose of this novel is for the readers to understand the mind of an abused woman. We are able to understand that there are many issues contributing to the outcome of Paula's identity such as her community, family life, school life, early relationships and abusive marriage. Even though Paula is an alcoholic, the readers are able to sympathise with her as she uses alcohol to suppress her pain. However, Paula becomes stronger at the end as she decided to break up with Charlo as well as giving up alcohol causing us to believe that Paula has really changed from the skittish and frightened character that we have met at the beginning of the novel. ...read more.