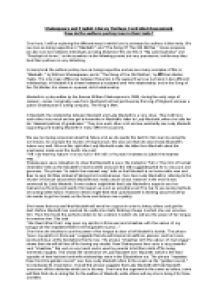 ﻿Shakespeare and English Literary Heritage Controlled Assessment How do the authors portray love in their texts? Over here, I will be exploring the different ways in which love is portrayed by authors in their texts. We see love as being supportive in ?Macbeth? and ?The Song Of The Old Mother.? As we progress, we also see love between individuals as being disturbed. We see this in ?My Last Duchess? and ?Porphyria?s lover,? as the speakers in the following poems are very possessive, but the way they treat their partners is very disturbing. In many texts the authors portray love as being supportive and we see many examples of this in ?Macbeth,? by William Shakespeare and in ?The Song of the Old Mother,? by William Butler Yeats. The only major difference between these two is the supportive love is shown in two different relationships: in Macbeth it is shown between a husband and wife relationship and in the Song of the Old Mother it is shown in a parent child relationship. Macbeth is a play written by the famous William Shakespeare in 1606, during the early reign of James I. James I originally was from Scotland but had just become the king of England and was a patron Shakespeare?s acting company, The King?s Men. In Macbeth, the relationship between Macbeth and Lady Macbeth is a very close. They both love each other very much and we get to know this in Macbeth's letter to Lady Macbeth, where he calls her his ?dearest partner of greatness.? They love each other a lot and we constantly see Lady Macbeth supporting and leading Macbeth in many different occasions. We see her being concerned about his future a lot as she wants the best for him even by using the evil means, for example the murder of King Duncan. We also see that she also knows Macbeth?s nature very well. ...read more.

However, others might think that she is working for herself as she also needs something to live on. Next we will look at love being disturbed, in which I will compare ?My Last Duchess? and ?Porphyria?s Lover? who are both dramatic monologues by Robert Browning. However in My Last Duchess, the speaker his wife as a possession and kill her for being frank with other men. While in Porphyria?s lover, the speaker kills her so she could stay with her forever. My Last duchess is a dramatic monologue written by Robert Browning. This poem also reflects his interests in the European culture as the poem is based on an Italian duke from the sixteenth century. The characters mentioned in this poem are based on real life, historical figures. The narrator is Duke Alfonso II who ruled a place in northern Italy called Ferrara between 1559 and 1597. The Duchess of whom he speaks was his first wife, Lucrezia de' Medici who died in 1561 aged 17, only two years after he married her. In real life, Lucrezia died in suspicious circumstances and might have been poisoned. The poem is set in 1564, three years after the death of the Duchess. An messenger has been sent to see the Duke from the Count of Tyrol. The Count is the father of the Duke's next wife. The Duke shows the messenger a picture of his late wife and remarks on her character, suggesting that she was unfaithful to him - and hinting that he might have killed her because of it. In this poem we see that the Duke was a very possessive man and wanted his wife to only pay attention to her. He could not see her smiling with other men. He got her painted on the wall smiling and draws a curtain on it so only he can see her smiling. This shows that the speaker?s mind was very disturbed. ...read more.

Later on he repeats ?no pain? to suggest that what he did what right and she did not feel any pain also telling us that he thought that Porphyria also approved of what he did. After killing Porphyria, he starts toying with her corpse thinking that it was the only way they could be together forever. In the end of the poem the speaker make reference of God, which suggests that he thinks that he has gotten away with what he has done. He said; ?And all night long we have not stirred, And yet God has not said a word!? Over here the speaker makes a reference to God, suggesting that God has approved of his actions as nothing has happened and the night has passed. This makes him think that he has gotten away with what he has done. The poet uses an exclamation mark in the end which makes the murder seem even worse. In conclusion, the writers use different language devices to prove the themes of their work. In ?Macbeth,? we that Shakespeare use a lot of metaphors to show how well Lady Macbeth knows Macbeth, which tells us how close they are. He also uses many imperative verbs in Lady Macbeth?s speech to her dominance in the relationship. In ?The Song Of The Old Mother,? Butler uses rhyming couplets to lay emphasis on the mother?s hard work and uses the pronoun ?I? a lot to show that she does all the work all by herself. In ?My Last Duchess,? Browning uses simple language in this poem however he uses a lot of powerful verbs that describe the what the Duchess did and uses a lot of suitable adjectives to remark on her character, which led to his decision of killing her. At last in ?Porphyria's Lover? Browning uses simple language but uses a lot of metaphors to show us that Porphyria?s love is pure and The use of pathetic fallacy in the start make the poem look more interesting to read. ...read more.