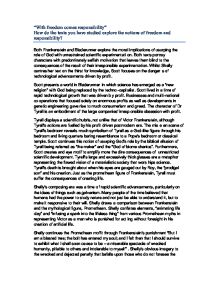 How do the texts you have studied explore the notions of freedom and responsibility? Both Frankenstein and Bladerunner explore the moral implications of usurping the role of God with unrestrained scientific experimentation.

How do the texts you have studied explore the notions of freedom and responsibility?

Both Frankenstein and Bladerunner explore the moral implications of usurping the role of God with unrestrained scientific experimentation. Both texts portray characters with predominately selfish motivation that leaves them blind to the consequences of the result of their irresponsible experimentation. Whilst Shelly centres her text on the thirst for knowledge, Scott focuses on the dangers of technological advancements driven by profit.

Scott presents a world in Bladerunner in which science has emerged as a “new religion” with God being replaced by the techno-capitalist. Scott lived in a time of rapid technological growth that was driven by profit. Businesses and multi-national co operations that focused solely on enormous profits as well as developments in genetic engineering gave rise to much consumerism and greed. The character of Dr Tyrell is an embodiment of the large companies’ irresponsible obsession with profit.

Tyrell displays a scientific hubris, not unlike that of Victor Frankenstein, although Tyrell’s actions are fuelled by his profit driven postmodern era. The mise en scene of Tyrell’s bedroom reveals much symbolism of Tyrell as a God-like figure through his bedroom and living quarters baring resemblance to a Pope’s bedroom or classical temple. Scott continues this notion of usurping God’s role by the biblical allusion of Tyrell being referred as “the maker” and the “God of biomechanics”. Furthermore, Scott creates and eye motif to amplify more the dire consequences of unrestricted scientific development. Tyrell’s large and excessively thick glasses are a metaphor representing the flawed vision of a materialistic society that worships science. Tyrell’s death is brought about when his eyes are gauged out by Roy, the “prodigal son” and his creation. Just as the promethean figure of Frankenstein, Tyrell must suffer the consequences of creating life.

Shelly’s composing era was a time of rapid scientific advancements, particularly on the ideas of things such as galvanism. Many people of the time believed that humans had the power to study nature and not just be able to understand it, but to make it responsive to their will. Shelly draws a comparison between Frankenstein and the mythological figure, Promethean. Shelly conflates elements, “animating life clay” and “infusing a spark into the lifeless thing” from various Promethean myths in representing Victor as a man who is punished for acting without foresight in his creation of artificial life.

Shelly continues the Promethean moffit through Frankenstein’s punishment “But I am a blasted tree; the bolt has entered my soul; and I felt then that I should survive to exhibit what I shall soon cease to be – a miserable spectacle of wrecked humanity, pitiable to others and intolerable to myself”. Shelly’s obvious imagery to the wrecked and dejected penalty that befalls upon those who do not foresee the consequences of their actions conveys a powerful to her audience that with freedom comes responsibility.