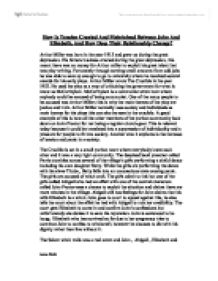 how doe arthur miller create tension in the crucible

How Is Tension Created And Maintained Between John And Elizabeth, And How Does Their Relationship Change? Arthur Miller was born in the year 1915 and grew up during the great depression. His fathers business crashed during the great depression, this meant there was no money for Arthur miller to exploit his great talent that was play writing. Fortunately through earning small amounts from odd jobs he was able to save up enough to go to university where he received several awards for his early plays. Arthur Miller wrote The Crucible in the year 1952. He used the play as a way of criticizing the government for what is know as McCarthyism. McCarthyism is a communist witch hunt where anybody could be accused of being communist. One of the many people to be accused was Arthur Miller; this is why the main themes of the play are justice and truth. Arthur Miller normally uses society and individuals as main themes for his plays this can also be seen in the crucible. A good example of this is how all the other members of the puritan community look down on John Proctor for not being a regular church-goer. This is relevant today because it could be translated into a suppression of individuality and a pressure for people to fit into society. Another area it explores is the increase of tension and panic in a society. ...read more.

It also gives the impression that John and Elizabeth where once a loving couple. The pattern of speech used by the characters increase the sense of tension because it is in short sharp snippets spoken rushed as if not to offend one another by speaking to long. It is clear that Elizabeth concerned why John is late and she decides to confront him about. She expresses her worry by saying 'You come so late I thought you'd gone to Salem this afternoon.' John lies and says 'Why! I have no business in Salem.' Which the audience knows is untrue because he was previously in Salem where he met Abigail, this shows that John feels he has to lie to Elizabeth and that it is easier then telling the truth. John then checks the stew and is displeased with its taste so he proceeds to add more seasoning. When he is served the stew and tasted it he compliments Elizabeth on the seasoning. These shows how troubled their relationship is because John would rather lie about the seasoning of the stew then tell her it was under seasoned. The couple begin to discuss the witch trials and Elizabeth asks John to go to court and explain to the court about Abigail's trickery. John dismisses this and says things like 'I'll think on it.' And the stage actions show him considering where or not to tell the court. ...read more.

Elizabeth finally forgives John telling him her true feelings 'John I counted myself so poorly made, no honest love could come to me! Suspicion kissed you when I did; I never knew how to say my love. It was a cold house I kept.' This also shows that she has recognised her own failings. Despite the fact that John is going to hang the audience now know they both recognise their love for each over which is signified by Johns kiss 'he lifts her, and kisses her now with great passion.' Showing they are not afraid to love each other. The play shows us that it is dangerous not to speak your mind and that it can lead to great tragedies. It is also dangerous for society to put someone in a position where they cannot speak their mind. John and Elizabeth realized this and if they had talked about their feelings more then Elizabeth would not have had to of lied. We can also see the parallels the play shares with the McCarthy communist hunt. The death at the end is important because it was preventable the play also shows how lies and deceit can lead to pointless deaths. We can also see the pressure needed for people to talk about there true feelings , only when John was about to hang did the pair express their love for each other and in contrast to this when they where living a comfortable life before the trials they where constantly wanting to please one another and not disrupt their normal everyday existence. ?? ?? ?? ?? James Webb ...read more.