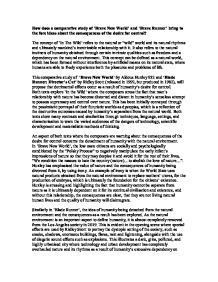 How does a comparative study of 'Brave New World' and 'Brave Runner' bring to the fore ideas about the consequences of the desire for control?

How does a comparative study of 'Brave New World' and 'Brave Runner' bring to the fore ideas about the consequences of the desire for control? The concept of 'In The Wild' refers to the natural or "wild" world and its natural rhythms and ultimately mankind's inextricable relationship with it. It also refers to the natural instincts of humanity obtained through certain intrinsic qualities such as freedom and a dependency on the natural environment. This concept can be defined as a natural world, which has been formed without interference by artificial means on its natural state, where humans are able to freely experience both the pleasures and problems of life. This comparative study of 'Brave New World' by Aldous Huxley 932 and 'Blade Runner: Director's Cut' by Ridley Scott (released in 1992, but produced in 1982), will propose that detrimental effects occur as a result of humanity's desire for control. Both texts explore 'In the Wild' where the composers stress the fact that man's relationship with nature has become distorted and distant in humanity's senseless attempt to possess supremacy and control over nature. ...read more.

Similarly in 'Blade Runner', the idea of humanity being detached from the natural environment and the consequences as a result has been explored. As the natural environment is an important aspect to define humanity, it is almost completely removed from the Los Angeles society in 2019. This is evident in the opening scene where special effects are used by Ridley Scott to portray the dystopic setting of the society, such as smoke, shadows, enormous buildings, flares, rain and lightening, alongside with the use of diegetic sound effects such as explosions. This illustrates a dark, grim, polluted, and highly urbanised city where technology and urban development has completely overhauled nature and its rhythms as a result of humanity's excessive dependency on technology and materialism. This has obviously resulted in the loss of the natural environment and humanity's appreciation for it, where humanity is ultimately and beyond doubt dependent upon. The natural environment cannot solely define humanity and its relationship with nature, however it must be integrated also with the aspect of freedom and liberation, because humans are dependent on this too. ...read more.

This is evident when the Nexus-6 Replicants pursue in the search for more life, "I want more life, F***er!". Ridley Scott has conveyed the loss of freedom and its impact on humans by using the symbol of a dove, which represents liberation, upon Roy's death, to emphasise that a loss of freedom for the desire of control leads to the deaths of 'innocent people' who possesses natural desires to live a natural human life in accordance with nature. A comparative study of 'Brave New World' and 'Blade Runner', despite being produced some fifty years apart, both present the same message about the dangerous repercussions which could negatively impact upon humanity and its relationship with nature, due to humanity's oblivious and heartless desire for control. Both texts display the concept of 'In the Wild' through various ways to indicate that humanity must preserve and maintain a harmonious relationship with nature and its rhythms to avoid the desires for control, and its resulting consequences. Both texts demonstrate how the process of eliminating natural elements of the world, will soon lead to the elimination of natural elements within themselves, which are imperative to human nature, and will ultimately devalue life completely. ...read more.