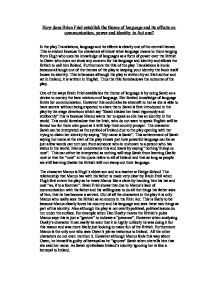 How does Brian Friel establish the theme of language and its effects on communication, power and identity in Act one?

How does Brian Friel establish the theme of language and its effects on communication, power and identity in Act one? In the play Translations, language and its effects is clearly one of the central themes. This is evident because the characters all show what language means to them ranging from Hugh who uses his knowledge of languages as a form of power over the British to Owen who does not show any concern for his language and identity and allows the British to call him Roland. Furthermore the title of the play Translations is ironic because although one of the themes of the play is keeping your identity the book itself looses its identity. This is because although the play is written by an Irish author and set in Ireland, it is written in English. Thus the title foreshadows the outcome of the play. One of the ways Brain Friel establishes the theme of language is by using Sarah as a device to convey the bare minimum of language. Her limited knowledge of language limits her communication. However this could also be a benefit to her as she is able to have secrets without being expected to share them. Sarah is first introduced in the play by the stage directions which say "Sarah shakes her head vigorously and stubbornly" this is because Manus wants her to speak so she has an identity in the world. ...read more.

However although Jimmy shows know signs of wanting to learn English his love of Latin and Greek have caused him to be unable to communicate properly with other characters as they only speak Gaelic. Thus Jimmy portrays what could happen to Ireland if they do not learn English as they will be cut off from the world. Additionally Jimmy's character also uses his knowledge of languages as a power over the British as he mocks captain Lancey for not being able to speak Latin "Nonne Latine loquitur?". Brain Friel also shows that due to Jimmy's reading of Greek stories such as the "Odyssey" he has created an alternative reality for himself in which figures of myth are as real to him as the people he sees everyday. This is revealed as he imagines situations when he would have to choose between Athene, Artimis and Helen. Due to these fantasies Manus calls Jimmy "a bloody dangerous man" suggesting that living in the past is dangerous. Thus foreshadowing that Manus, who does not embrace the English language in his country, may be dangerous as he is still living in the past The characters captain Lancey and Yolland although both working for the British army have very different views on what they have been ordered to do in Ireland. This is apparent by the way that they act when they first meet the Irish people. ...read more.

It's the same me isn't it?". This quote reveals that Owen places know value in his identity. Owen's translation of what Lancey is saying on pages 31/32 also show how Owen uses his ability to communicate with the English as power over the Irish. This is because his mistranslation of what Lancey is saying to the Irish allows Owen to make it seem that the British are in their country to help them, not remove their language. The character Hugh although conveyed as a figure of dignity in Baile Beag is ironically a heavy drinker and is shown little respect by characters such as Daolty as he mocks him behind his back by impersonating the way he acts. Hugh, who is fluent in English, Latin, Greek and Gaelic is very critical of the British language referring to it as a language for traders. Furthermore the distain with which he speaks of Lancey for not knowing any Gaelic, Latin and Irish shows how he uses his knowledge of languages as a weapon against the British as he is able to show his superior intelligence. In conclusion Brain Friel's uses characters, dramatic setting and many other devices to show how language plays a key role in this play. Furthermore his use of characters in the play to convey the bare minimum of language (Sarah) and the height of language (Hugh) add to the effect of how he uses language. ...read more.