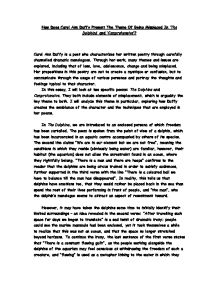 How Does Carol Ann Duffy Present The Theme Of Being Misplaced In The Dolphins(TM) and Comprehensive(TM)?

How Does Carol Ann Duffy Present The Theme Of Being Misplaced In 'The Dolphins' and 'Comprehensive'? Carol Ann Duffy is a poet who characterizes her written poetry through carefully channelled dramatic monologues. Through her work, many themes and issues are explored, including that of loss, love, adolescence, change and being misplaced. Her propositions in this poetry are not to create a mystique or confusion, but to communicate through the usage of various personas and portray the thoughts and feelings typical to that character. In this essay, I will look at two specific poems: The Dolphins and Comprehensive. They both include elements of misplacement, which is arguably the key theme to both. I will analyze this theme in particular, exploring how Duffy creates the semblance of the character and the techniques that are employed in her poems. In The Dolphins, we are introduced to an enclosed persona of which freedom has been curtailed. The poem is spoken from the point of view of a dolphin, which has been incarcerated in an aquatic centre accompanied by others of its species. The second line claims "We are in our element but we are not free", meaning the conditions in which they reside (obviously being water) ...read more.

The poem also displays the loss of hope through means of repetition. "There is" is a common phrase which appears in the poem on several occasions ("There is" a 'constant flowing guilt', 'coloured ball', 'no hope', amongst others) and this augments the effectiveness of the dolphin's monologue, as a picture of their lives become clearer; as does the sorrowful tone. An alternative tone is found within Comprehensive; however the theme of misplacement is also evident. These verses depict passages of the lives of young boys from distinctive ethnical backgrounds; one being British and raised in the United Kingdom, the other being Muslim who has moved to Britain from Africa with his family. The poem compares and contrasts their lives and differences as each verse rotates their personas. This is an effective technique - through this style, we can identify how their personalities are divaricated from one another. For example, we can analyze the opening line: "Tutumantu is like hopscotch, Kwani-kwani is like hide-and-seek" - the impression is gained that the boy is still adjusting to his new surroundings, behaving comparatively as he seeks to acclimatize to life in Britain. ...read more.

The quote shows that the character finds comfort in thinking of retrospective times in life to make it easier to get by. Looking back at The Dolphins and their experiences being circus trained, it can be confidently said that they favoured the freedom of the ocean to the place where they would spend the rest of their lives. A memory of a better time was also revisited in this poem, albeit in a more longing and downbeat tone ("We see our silver skin flash by like memory of somewhere else") which confirms that they missed the lives they once led. In conclusion, Carol Ann Duffy has created two notably distinct personas and conveyed a realistic interpretation of how that character would feel, being placed in that corresponding situation. The theme of misplacement was a common point within the poems, as the characters often voiced their concerns at the problems and positions they had been put in. This was far more prominent in The Dolphins, which would make the majority of the poems readers sympathetic towards the dolphins being enclosed. Sympathy is not really a case in Comprehensive, as there is a stronger element of hope for the character who is attempting to fit in. Based on this opinion, I believe The Dolphins serves as a more effective representation of misplacement. ...read more.

This is a well structured essay which uses PEA throughout and makes some important and perceptive comments. There are frequent lapses in expression and in word choice which need to be edited.