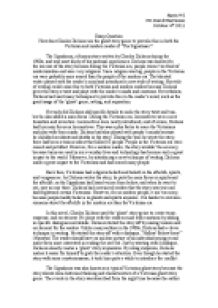 How does Charles Dickens use the ghost story genre to provoke fear in both the Victorian and modern reader of The Signalman?

﻿Narin 9-5 Mr. David Marrinson October 4th 2011 Essay Question How does Charles Dickens use the ghost story genre to provoke fear in both the Victorian and modern reader of ?The Signalman?? The Signalman, a famous story written by Charles Dickens during the 1900s, and was most likely of his personal experiences. Dickens was known for the success of the story because during the Victorian era, people weren?t so fond of modernization and were very religious. Since religion was big, people in the Victorian era were probably more scared than the people of the modern era. The talented writer played with the reader?s mind and introduced a new style of writing. His style of writing could cause fear to both Victorian and modern readers because Dickens gives the story a twist and plays with the reader?s minds and emotions. Nevertheless, Dickens had used many techniques to provoke fear in the reader?s mind, such as the good usage of the ?ghost? genre, setting, and exposition. Not only did Dickens add specific details to make the story twist and turn, but he also added a main focus. During the Victorian era, locomotives were a new transition and invention. Locomotives were newly introduced, and of course, Dickens had his main focus on locomotives. ...read more.

By rising suspicion, Dickens makes it easier for himself to grab the reader?s attention. Even though he started the story with some mysteriousness, it took him quite a while to introduce the conflict. The Signalman was also known as a typical Victorian ghost story because the story shows some historical thinking and characteristics of a Victorian ghost story genre. The events in the story was described from the night time because the author had included specific details such as how the signalman carries a ?white light? and how it keeps describing the setting as dark. Spirits were also introduced in the story, as the story unfolded. The weather was cold, windy, and forbidding. For example, ?there was a barbarous, depressing, and forbidding air.?(Narrator) This made the setting scarier and the mood even darker and more depressing. Another plus factor of Dickens? writing was how he overtook the story?s setting. Charles had included different ghost story conventions and made the story more terrifying. Dickens added specific details to the story so it would be more frightening. ?On either side, a dripping-wet wall of jagged stone, excluding all view but a strip of sky; the perspective one way only a crooked prolongation of this great dungeon; the shorter perspective in the other direction ...read more.

Regardless of how, the way that Dickens chose to create the buildup of the story was fantastic and marvelous. Not any author would choose to write such a wondrous setting and exposition. Charles Dickens wrote the setting so that it was very dark and scary, touching the reader?s senses and playing around with the reader?s thoughts. However, we may identify this story as both typical and untypical for many reasons. It was very typical of him, when Dickens introduced the characters and setting of the story. Most scary stories were typically dark and scary. Moreover, the untypical part of the story was when the plot was introduced. Dickens had touched the readers so that they would want to continue reading and finish the story. A Victorian reader would find this story scary, as they had beliefs in the afterlife, but a modern reader wouldn?t really find the story scary, because it would be very typical for modern world writing. To reciprocate, I would say that this book was really creative for a writer in the Victorian era, but very typical for a writer in the modern world. I found this book interesting, as the author had included great details and soft touches to make the short story slightly more interesting. ...read more.