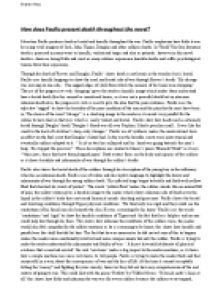 How does Faulks present death throughout the novel?

﻿Sharon Maj How does Faulks present death throughout the novel? Sebastian Faulks portrays death as brutal and horrific throughout the war. Faulks emphasize how futile it was by using vivid imagery of Jack, John, Tipper, Douglas and other soldiers deaths. In World War One literature death is procured in many ways as horrific, violent and tragic and also as patriotic however in this novel death is shown as being futile and cruel as many soldiers experience horrible deaths and suffer psychological trauma from their experience . Through the death of Reeves and Douglas, Faulks? shows death is not heroic in the trenches but is brutal. Faulks uses horrific language to show the cruel and brutal side of war through Reeves?s death: ?His ribcage was missing on one side?The ragged edges of skull from which the remains of his brain were dropping?. The use of the progressive verb ?dropping? gives the reader a horrific image which makes them understand how a brutal death like this cannot be considered heroic, as it was not a peaceful death but an atrocious inhuman death also, the progressive verb is used to give the idea that the pain continues. Faulks uses the adjective ?ragged? to show the brutality of the poor condition of the man and the pain that he must have been in. The choice of the word ?ribcage? is a shocking image to the reader as it sounds very painful for the soldier to have died in that way which is really violent and brutal. ...read more.

Faulks is trying to make the reader understand the inhumanity and futility of war: ? A direct hit would obliterate all physical evidence that a man had existed? the verb ?existence? makes a big impact to the reader emotions, as it shows how a simple machine can cause such harm, to kill people. Faulks is trying to make the reader think and feel remorseful in a way, about the consequences of war and the loss of life. At the time it seemed acceptable killing the ?enemy? and fighting for your country, however they did not have any comprehension of the real motive of going to war. This could link with the poem ?Futility? by Wilfred Owen: ?To break earth?s sleep at all? this shows how futile and inhuman the war was for every soldiers because the soldiers were trapped, physically and mentally tortured in the war and died without real motive. Faulks develops his presentation of death and shows how complacent the soldiers are as Weir death achieves nothing. Faulks uses of visual imagery helps the reader understand the horror and reality of war ?a sniper?s bullet entered his head above the eye causing trails of his brain to loop out? the word loop out makes the reader feel shocked on how cruel and unjust his death was as it foreshadows the fact that most of the soldiers must have died in that way, without even realising on how fast you could die from just a bullet. ...read more.

Faulks shows that their humanity comes back only when dead: ? He felt tranquillity at the moments when his pain left him? The juxtaposition of tranquillity and pain shows how soldiers find peace only when they die. Faulks uses repetition to convey the monotony and futility of war: ?I don?t want that. Don?t want that?. The repetition show that Jack, as most of the soldiers during the war, have lost the hope for wishing their own life to be saved they wish their own death instead so that all the suffering and pain would come to an end; this make a great impact to the reader as it shows how death can be so cruel, inhuman and futile. This is similar to the poem ?Come On, Come Back? by Stevie Smith: ?Sleeps on, stirs not, hears not the familiar tune?. This shows that both writers focus on the tranquillity and peacefulness of death, because it shows how soldiers were fed up with their own lives. In conclusion Faulks shows how death can be portrayed in positive and negative ways. During the war soldiers had seen their own death as a positive thing in a way, as many soldiers still had religious beliefs and therefore did wish to be reunited with God and be in a better place. Some soldiers however did experienced horrendous deaths and the concept of death was seen as inhuman and futile also, in an emotional way as they did see their friends dying for no real motive. ...read more.