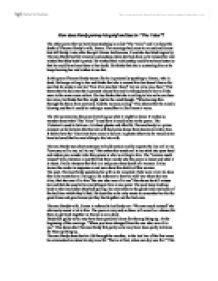 How does Hardy portray his grief and loss in The Voice?

How does Hardy portray his grief and loss in "The Voice"? The other poem that we have been studying is called "The Voice" and it is about the death of Thomas Hardy's wife, Emma. The marriage had come to an end and Emma had left Hardy. Later after the split Emma had become ill and she had died tragically. Thomas Hardy had felt remorse and sadness when she had died, as he missed her and wished that they hadn't parted. He wished their relationship could have been better so that he could have been there at her death. He thinks that she is contacting him as he keeps hearing her and wishes to see her. In this poem Thomas Hardy seems like he is personally speaking to Emma, who is dead. He keeps calling to her and thinks that she is around him but doesn't know for sure but he wants to see her "Can it be you that I hear? Let me view you, then," This shows that he believes she is present around him and is talking back to her as if she were in the same room as him. He also thinks that she is calling to him as he can hear her voice, he thinks that this might just be the wind though. "Wind oozing thin through the thorn from norward, And the woman calling." This shows that the wind is blowing and that it could be making a sound that is like Emma's voice. ...read more.

He also refers to Emma's dress "Even to the original air blue-gown!" this tells the audience that Thomas hardy may have been referring to a particular day that he could remember as he remembers it in particular detail. The blue gown could have been her favourite dress as he remembers that one in particular. Thomas Hardy ends stanza two with an exclamation mark, this shows his anger and his annoyance at the fact that his wife is dead. It shows that he just wants her back like when he remembers, but he can't, this is why he is angry. In the third stanza Thomas Hardy changes his mood from totally believing that Emma was around him and talking to her, to maybe she's isn't it might just be the breeze "Or is it only the breeze, in its listlessness" this shows that he is thinking about all the options and the facts that maybe ghosts aren't real, and maybe its just the wind playing a trick on him. He is vulnerable at that moment as he wants it to be with Emma so he can say his goodbyes, this makes him believe that anything that sounds a bit like Emma could be. In the third stanza Thomas Hardy seems to have lost hope compared to stanza two he asks more questions in the third stanza. This may mean that he is not sure as he needs to know more answers. Thomas Hardy uses personification in this stanza to describe the breeze as being listless "Or is it only the breeze, in its listlessness" listlessness usually describes how a human is feeling, which is having a lack of energy. ...read more.

Thomas Hardy start the poem with "And the woman calling." This is important as he doesn't mention a woman calling in the poem until the start. The whole poem is based around the fact that she is talking to him. Thomas Hardy structures the poem dividing the poem into four stanzas. In each stanza he uses quatrains. This gives rhyme to the poem by adding structure. I think that Thomas Hardy's grief was genuine, because he wrote the poem about his grief and feelings for Emma. Thomas Hardy had felt guilt for not speaking to Emma over there marriage break up, he felt that he should have made peace with Emma and become friends again before she died. My first impressions of the poem is that it is very sad and all about death. The poem was obviously about a woman who had died, and about a man who was grieving her death. At first the poem was confusing and didn't make a lot of sense but it all fitted together when you read it a couple of times. I think that it was confusing at the start because it had used words I had not been familiar with before. I now think that the poem is easier to understand now that I know what most of the words mean and the basic storyline to it. I think that my understanding and impressions of the poem has changed as I can now understand it better and I think that this poem is very good. ?? ?? ?? ?? ...read more.