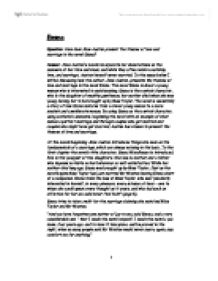 How does Jane Austen present the themes of love and marriage in the novel Emma?

Emma Question: How does Jane Austen present the themes of love and marriage in the novel Emma? Answer: Jane Austen's novels incorporate her observations on the manners of her time and class, and while they often relate courtship, love, and marriage, Austen herself never married. In the essay below I will be discussing how the author, Jane Austen, presents the themes of love and marriage in the novel Emma. The novel Emma is about a young woman who is interested in matchmaking. Emma is the central character, who is the daughter of wealthy gentleman, her mother died when she was young leaving her to be brought up by Miss Taylor. The novel is essentially a story of how Emma matures from a clever young woman to a more modest and considerate woman. By using Emma as the central character, using authorial comments, beginning the novel with an example of what makes a perfect marriage and through couples who get married and couples who might have got married, Austen has chosen to present the themes of love and marriage. At the novels beginning Jane Austen introduces things she sees as the fundamentals of a marriage, which are always echoing in the back. In the first chapter the novel's title character, Emma Woodhouse is introduced. She is the youngest of two daughters. She has no mother and a father who imposes no limits on her behaviour or self-satisfaction. While her mother died long ago, Emma was brought up by Miss Taylor. Just as the novel begins Miss Taylor has just married Mr Weston leaving Emma short of a companion. Emma feels the loss of Miss Taylor, who was "peculiarly interested in herself, in every pleasure, every scheme of hers - one to whom she could speak every thought as it arose, and who had such an affection for her as could never find fault" (page 6). ...read more.

After Emma has opened herself to the idea of falling in love with Frank Churchill, she realises that she does not in fact love him. She does not love Frank Churchill because she exists so well with him and without him. Still, although she does not love Frank Churchill, she enjoys all his attention. However, Emma continues to make the same mistakes. She has not learned from the match between Mr Elton and Harriet and fancies the idea of making a match between Frank Churchill and Harriet. Mr Elton has found a perfect match in Augusta Hawkins: a woman as dull and socially conscious as he is. Mrs Elton constantly offers her own superiority and treats the members of Highbury society with much less respect. As bad as Mrs Elton's manners are, they are made worse by her position in society. Her snobbery and comparisons of Hartfield to Maple Grove are made worse by the fact that her connections in Maple Grove are wealthy but lower class. She even calls Mr Knightly by his first name. This continues the idea found in Emma that social class determines proper manners. Mrs Elton does not know her proper rank in society. Emma is quite crucial about whom she likes and dislikes, and once she decides that she dislikes Mrs Elton, there is little chance that she will change her opinion. In fact her opinion of Mrs Elton does change: it becomes worse. Once again status plays a consideration. Emma dislikes Mrs Elton because she presumes herself to be higher in society than she actually is, believing that her connections at Maple Grove make her quite respectable. This chapter (35) reveals the fate of Jane Fairfax, since she is not from a wealthy family, although was raised by one; she must go into a profession as a governess. As raised by the Campbell's, she was part of the elite and lived as Emma does now. ...read more.

Both require partners who will bring out their best qualities while controlling their worst qualities. Frank Churchill and Emma indulge each other's pride and immaturity, but with the influence of Jane Fairfax and Mr Knightly, Frank and Emma become more sensible and decent persons. In Emma the relationships that work best are those in which the partners complement each other but do not resemble one another; Mr and Mrs Elton share a vulgar attention to social status and an utter lack of consideration for others feelings. But Jane Fairfax counters Frank's frail character with a reserved manner, Robert Martin is sensible where Harriet Smith is foolish and gullible, and Mr Knightly is observant where Emma misjudges situations. Harriet writes to Emma about Robert Martin, and admits that she was stupid to consider Mr Knightly. Harriet learns about her parents: her father was a respectable tradesman who could provide for her stay at Mrs Goddard's school. Emma meets Robert Martin and becomes convinced that Harriet will be happy with him. Harriet marries Robert Martin, and later, after Mr Woodhouse has agreed, Emma marries Mr Knightly. Everything is set right in this chapter: Harriet becomes a respectable member of society when she learns of her family connections and finds happiness with Robert Martin. She is, as Emma had hoped, from a decent family. Not surprisingly, Mr Woodhouse becomes supportive of his daughter's marriage when he thinks it will benefit his own comfort. He agrees to the marriage after a number of robberies, for he thinks that Mr Knightly's presence at Hartfield will keep him safe. Emma finally marries Mr Knightly after the wedding Mr and Mrs knightly go on vacation to the ocean the first instance in the novel in which Emma leaver Highbury. Overall the ways in which Jane Austen presents the themes of love and marriage on the novel 'Emma' is significant. She shows them through a number of ways and portrays them significantly. ?? ?? ?? ?? 1 ...read more.