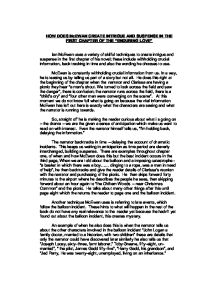 How does McEwan create intrigue and suspense in the first chapter of the &quot;Enduring Love&quot;.

HOW DOES McEWAN CREATE INTRIGUE AND SUSPENSE IN THE FIRST CHAPTER OF THE "ENDURING LOVE" Ian McEwan uses a variety of skilful techniques to create intrigue and suspense in the first chapter of his novel; these include withholding crucial information, back tracking in time and also the wording he chooses to use. McEwan is constantly withholding crucial information from us. In a way, he is teasing us by telling us part of a story but not all. He does this right at the beginning of the chapter when the narrator and Clarissa are having a picnic they hear "a man's shout. We turned to look across the field and saw the danger", there is confusion; the narrator runs across the field, there is a "child's cry" and "four other men were converging on the scene". At this moment we do not know full what is going on because the vital information McEwan has left out here is exactly what the characters are seeing and what the narrator is running towards. ...read more.

Another technique McEwan uses is referring to late events, which follow the balloon incident. These hints to what will happen in the rest of the book do not have any real relevance to the reader yet because the hadn't yet found out about the balloon incident, this creates mystery. An example of when he also does this is when the narrator tells us about the other characters involved in the balloon incident "John Logan a family doctor, married to a historian, with two children" these are details that only the narrator could have discovered later similarly he also tells us that "Joseph Lacey, sixty-three, farm laborer," Toby Greene, fifty-eight, un- married", " the pilot, James Gadd fifty-five", "Harry Gadd, his grandson", and "Jed Parry, He was twenty-eight, unemployed, living on an inheritance." Certain words he chooses are very carefully inserted to imply serious consequences. When the narrator tells us "our fatal lack of co-operation" the way he chooses to use the word "fatal" is an example of this technique, of all the words he could have used in this sentence the one he cleverly puts in makes it a dramatic statement giving the reader the drama that creates suspense. ...read more.

At the start of the first chapter, McEwan uses a buzzard to give another view of the action. The narrator tells the reader "I see us from three hundred feet up, through the eyes of a buzzard" this provides an alternative view. In conclusion to how McEwan creates intrigue and suspense in the first chapter, is by using several different literary devices and techniques in the right places to cleverly draw the reader into the plot. As this, quote proves, "the most gripping first chapter I've ever read" written by Rachel Billington of "The Guardian" and the "Daily Mail" - "It's amazingly perfect fist chapter had me hyperventilating." The reason McEwan creates all this suspense and intrigue is because he wants us to read on and to make us want to read on. He also makes a lot of suspense by creating cliffhangers, which make the moments of drama in which the outcome is uncertain. In addition, the fact that the chapter is a retrospective account of the narrator it makes it easier for McEwan to insert and play around with each of his methods. ...read more.