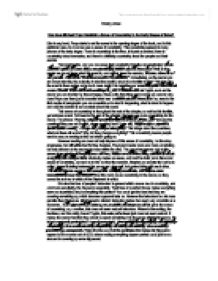 The book begins, and you can sense that uncertainty from the very beginning ‘and there it is again: the same almost embarrassingly familiar breath of sweetness’ Well as the reader we do not know what this scent is, and neither does the narrator, ‘It comes from one of the gardens. Which one? I can never trace it. And what is it?’  Immediately, as the reader you are drawn into this, the curiosity of what the smell it, why is it so familiar to him? This idea of the scent is then carried on in much more detail. It is described as ‘something quite harsh and coarse. It reeks. It has a kind of sexual urgency to it. And it unsettles me’ Again, even as the reader you are troubled by these images, these quite disturbing words make you wonder why does Frayn use them just to describe what was ‘a familiar breath of sweetness’ so, even in the first couple of paragraphs you are uncertain as to what is happening, what is about to happen and why the narrator is so uncertain about this scent.

This sense of uncertainty is throughout the rest of the chapter, as well as this familiar, yet unknown scent. Yet towards the end of the chapter, there is even more uncertainty for the reader. The phrase ‘Was my daughter speaking English when she told me that?’ arouses the question if they are not English, where are they from? Later still, ‘Six [words], to be precise. Spoken quite casually…And yet they changed everything.’  This brings about the questions, what are these six words? Why did they change everything? This uncertainty means people want to carry on reading to find out what’s going on.

However reading on does not help dispose of this sense of uncertainty. As the story progresses, but still within the first few chapters, Frayn just creates more and more uncertainty, not only directed at the readers but also within the story. The use of oxymorons add to this sense of uncertainty, ‘Everything was as it was, I discover when I reach my destination, and everything has changed.’ This obviously makes no sense, as it can’t be both; so to this added sense of uncertainty, we read on to find out that the narrator, Stephen as we later find out he is called, keeps flickering between his young and older self, but contradicting with each other, ‘And then I become aware of the atmosphere changing around me, as if the past were rematerialising out of the air itself’. Now this could cause uncertainty to the reader, as they cannot be sure as to which of the Stephen’s is which.

It is also the idea of peoples’ behaviour in general which causes much uncertainty, and a lot more peculiarity, the Haywards especially. Their idea of a perfect house makes everything seem so superficial, why is everything this perfect? You could get the idea that they are covering something up, which becomes apparent later on. However the behaviour is a lot more peculiar than the house. Mrs Haywards relaxed behaviour makes her seem very uncertain as a character, ‘ She’d appear in the doorway, rested, calm, and composed..’ This gives the sense of uncertainty, as, a mother, this does not seem natural behaviour. Where is the rushing, the business, and the untidy house? Again, this eerie perfectness just does not seem natural. It makes the reader feel that they should suspect something. It is the same with Mr Haywards. He is just unnaturally perfect that it doesn’t seem right, ‘for ever digging and dunging, and trimming and pruning, for ever undercoating and painting, and wiring and rewiring, for ever making perfection yet more perfect.’ Here it is the use of all the participles that makes Mr Haywards appear to have some sort of OCD, where making everything appear perfect could just be an excuse for covering up some big secret.

This secret is supposedly exposed at the end of Chapter 2, ‘”My mother”, he [Keith] said reflectively, almost regretfully, “is a German spy.’” Again, this is another sense of uncertainty – childish naivety. Throughout the early chapters, these youthful interpretations of life just seem to add to Stephen’s confusion, and uncertainty for the boys. After this discovery of a German spy, life seems to have completely changed for the boys, ‘Everything that we’d once taken for granted now seems open to question.’ Both boys are now suspicious of every ordinary thing. So, again, Frayn has created a sense of uncertainty with the boys as to whim they can trust, what in life is actually the truth, and it is all based on what the reader is uncertain of being true. It was just Keith saying that his mother was a spy, so how are we, as the reader, to know whether this is true unless we read on?

About this whole idea, the boys, although they think they have uncovered a lot of answers, are still too naïve to know the true meanings of things later on. As they discover Mrs Haywards diary, and notice some sort of code, ‘He turns the pages again. More x’s. More exclamation marks. As I record them, a pattern begins to emerge.’ What the boys believe to be some kind of secret code, is really just Mrs Haywards keeping track of her periods and times she’s had sex with her husband, yet although the reader can figure this out, the boys’ naivety ensues them to believe that she is a German spy, and due to this determination, the reader is still unsure what to believe without reading on.

Frayn’s use  of questions without the first few chapters allows the reader to remain grasped into the book, as well as unsure as to what is actually happening. He allows the boys’ imaginations to take over and confuse the reader so they are uncertain what to believe. The use of peoples’ behaviour makes us query as to what is actually going on, are people truly just this perfect? Lastly the idea of past and present is what creates this continuous uncertainty. As Stephen is now a lot older and is looking into the past, he is uncertain of what he is actually remembering, and how accurate it is, ‘What I remember, when I examine my memory carefully isn’t narrative at all. It’s a collection of vivid particulars.’ What Stephen remembers is not a story, its lots of different objects or expressions etc, so even if he does remember these ‘vivid particulars’ it is uncertain that he is remembering them in the right order and the other details, or if he is just actually just remembering some object and making up his past based around this. Frayn uses this idea of an uncertain memory to tell this story. Due to this, the sense of uncertainty is inevitable in the early stages of Spies.