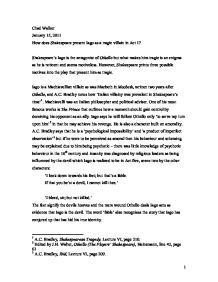 How does Shakespeare present Iago as a tragic villain in Act 1?

Chad Walker January 15, 2011 How does Shakespeare present Iago as a tragic villain in Act 1? Shakespeare's Iago is the antagonist of Othello but what makes him tragic is an enigma as he is reticent and seems motiveless. However, Shakespeare prints three possible motives into the play that present him as tragic. Iago is a Machiavellian villain as was Macbeth in Macbeth, written two years after Othello, and A.C. Bradley notes how 'Italian villainy was prevalent in Shakespeare's time'1. Machiavelli was an Italian philosopher and political adviser. One of his most famous works is The Prince that outlines how a monarch should gain control by deceiving his opponent as an ally. Iago says he will follow Othello only 'to serve my turn upon him'2 in that he may achieve his revenge. He is also a character built on amorality. A.C. Bradley says that he is a 'psychological impossibility' and 'a product of imperfect observation'3 but if he were to be perceived as amoral then his behaviour and scheming may be explained due to him being psychotic - there was little knowledge of psychotic behaviour in the 16th century and insanity was diagnosed by religious leaders as being influenced by the devil which Iago is realized to be in Act five, scene two by the other characters: 'I look down towards his feet; but that's a fable. If that you be'st a devil, I cannot kill thee.' ...read more.

What is also notable about Iago is that he speaks to Othello in verse but prose to Roderigo, which shows how he is a sycophant but also - as his rhetoric usage is superseded by Othello's - he feels he is forever in Othello's shadow. Another source for his hate. Lastly, and most importantly, Iago's third possible motive for delivering vengeance upon Othello is that Othello made a cuckold of him by sleeping with Emilia. Iago proclaims this in Act one, scene three: 'I hate the Moor, And it is thought abroad that 'twixt my sheets He's done my office.' He is even unsure of whether it is true but the thought infuriates him so much that he decides that the idea is as worthy of being revenged as if it were true: 'I know not if't be true But I, for mere suspicion in that kind, Will do as if for surety.' The idea of Emila having an affair with Othello may be what prompted him to assume that Desdemona's interest in him was purely sexual and so we begin to see how Shakespeare has created a tragic villain as he is drawing from his own misfortune and jealousy to fulfil his prophesy of revenge. It may even be a misconception that Emilia and Othello have had an affair as there is no further evidence that this is 'true' and we, the audience, do not know what has stirred this possibility in Iago's mind - another aspect of him ...read more.

Iago's phrase 'defeat thy favour with a usurped beard' means to reinstall manly hood, which may be another means of defining him as tragic as his fragile mind in a patriarchal world leads him to the assumption that maybe this is how he should react, to be a 'man' by domineering the situation: a possible way of Shakespeare illustrating men's true powerlessness from a demanding patriarchy in terms of what makes 'manly' behaviour. From this, we can see that Iago wanted to make Othello suffer the same strength of jealousy as he has done to him. This may not fit Hegel's idea of tragic collision but each character certainly has been 'negating and damaging... [the] power of the other'5. They may not be suffering each other's guilt but they do cause one another to suffer jealousy. Othello's (possible) misdeed negates the power Iago has over his mind and Iago avenges this by reciprocating. Iago is a tragic villain in that he has had to suffer and through his amoral conscience and egoistic nature he has become consumed by the loss of trust in his love. The line 'tis in ourselves' suggests that he accepts who he has become and the line 'permission of the will' validates that he is amoral and that he recognises he is significantly different from others in the way that he thinks: 'I never found a man who knew how to love himself' This implies that he is this man and Aristotle would agree that he is 'true to life and yet more beautiful'6. ...read more.