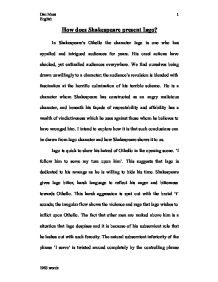 How does Shakespeare present Iago?

How does Shakespeare present Iago? In Shakespeare's Othello the character Iago is one who has appalled and intrigued audiences for years. His cruel actions have shocked, yet enthralled audiences everywhere. We find ourselves being drawn unwillingly to a character; the audience's revulsion is blended with fascination at the horrific culmination of his terrible scheme. He is a character whom Shakespeare has constructed as an angry malicious character, and beneath his fa�ade of respectability and affability has a wealth of vindictiveness which he uses against those whom he believes to have wronged him. I intend to explore how it is that such conclusions can be drawn from Iago character and how Shakespeare shows it to us. Iago is quick to show his hatred of Othello in the opening scene. 'I follow him to serve my turn upon him'. This suggests that Iago is dedicated to his revenge as he is willing to bide his time. Shakespeare gives Iago bitter, harsh language to reflect his anger and bitterness towards Othello. This harsh aggression is spat out with the brutal 't' sounds; the irregular flow shows the violence and rage that Iago wishes to inflict upon Othello. The fact that other men are ranked above him is a situation that Iago despises and it is because of his subservient role that he lashes out with such ferocity. The natural subservient inferiority of the phrase 'I serve' is twisted around completely by the controlling phrase 'upon him'. ...read more.

We see Iago challenging Brabantio's authority as he does with Othello. Iago cries that Brabantio is 'a Senator', which is thrown out as a sadistic insult. Iago is constantly abusive, and draws on racist preconceptions when focusing on Othello's blackness and how Desdemona is 'white', the contrast would be seen as good and evil in Iago's mind as black is supposedly the colour of the devil, 'devils will the blackest', ironically the true battle between good and evil is between Othello and Iago; the irony in this situation being that the white man has a dark sickening heart and that it is Othello so who is 'noble'. We see that Iago acts sinisterly towards Othello because he believes him to have bedded his wife, 'twixt my sheets he's done my office' suggests that Iago's view of sex is that its merely a 'deed'. Iago finds the idea of his wife sleeping with another man repulsive as it robs him of his ownership of her, not because she has broken his heart. The word 'office' is associated with a job and allows Iago to imprint his view of women 'go to bed to work'. Iago tells Cassio that 'reputation is an idle and most false imposition', however it is the most important thing he possess. Without respect he is nothing, if it were to become public knowledge that Emilia had an affair then Iago would be branded a cuckold. Iago's character has been presented as being self-obsessed and selfish; therefore I believe that it is the idea of horns rather than grief which makes him lash out. ...read more.

If this is to be taken literally then Iago is the devil. At the end of the Birmingham theatre company's adaptation where Iago is shown to have no compassion and laughs at the bodies before him, showing him to be the complicated heartless menace that he is and stripping him of the title 'honest Iago'. Iago's character is a complex one which we as an audience never completely understand. There is bewilderment as to the force of his anger. The audience are made uncomfortable not only at the complexity of the character but also how we found ourselves laughing at Iago's malevolent actions over the course of the play. The word 'Iago' directly translates as 'he who usurps'. Ironically Iago moves to usurp Othello, but eventually usurped himself by the woman who he has treated with great disdain and disrespect, his wife. 'Emilia' translates as 'rival' which is very true as in the final scene she truly is Iago's rival by standing up to him and revealing how Iago 'begged of me to steal' the handkerchief. Iago would see this as him being usurped in his plans whereas the audience and the other characters would see this as a brave and courageous act by Emilia. Iago would see this as his views on women being proved before his very eyes whereas the audience would see her actions as disproving Iago's views. Iago shows his conflicting view by stabbing his wife, therefore proving himself to be dishonest and manipulative and desperate for power, revealing him to be the usurper he really is. ?? ?? ?? ?? 1 Dan Moss English 1963 words ...read more.