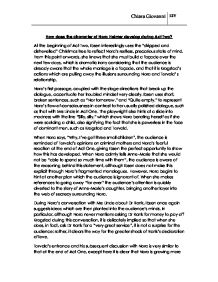 How does the character of Nora Helmer develop during Act Two?

How does the character of Nora Helmer develop during Act Two? At the beginning of Act Two, Ibsen interestingly uses the "stripped and dishevelled" Christmas tree to reflect Nora's restless, precarious state of mind. From this point onwards, she knows that she must build a fa�ade over the next few days, which is dramatic irony considering that the audience is already aware that the whole marriage is a fa�ade, and that it is Krogstad's actions which are pulling away the illusions surrounding Nora and Torvald's relationship. Nora's first passage, coupled with the stage directions that break up the dialogue, accentuate her troubled mindset very clearly. Ibsen uses short, broken sentences, such as "Nor tomorrow." and "Quite empty." to represent Nora's flow-of-consciousness in contrast to her usually polished dialogue, such as that with Mrs Linde in Act One. The playwright also hints at a slide into madness with the line "Silly, silly." which shows Nora berating herself as if she were scolding a child, also signifying the fact that she is powerless in the face of dominant men, such as Krogstad and Torvald. ...read more.

Torvald's entrance and his subsequent discussion with Nora is very similar to that at the end of Act One, except here it is clear that Nora is growing more and more desperate, which is reflected not only in her arguments against the dismissal of Krogstad, but also her wild compliance with and exaggeration of Torvald's pet names for her (e.g. "I'd turn myself into a little fairy and dance for you in the moonlight, Torvald."), showing that she is sensing her ever-imminent fall from grace in his eyes and her desire to protect his love for her. The dialogue between husband and wife concerning Torvald's real reason for dismissing Krogstad is significant and foreshadows his reaction to Nora's crime. Ibsen clearly shows Torvald's desire to protect his reputation and ego by referring to himself in the third person as "the new vice-president", highlighting his overblown sense of self-importance. Torvald's wish to protect himself from external mockery and criticism, which Nora so rightly describes as "petty" clearly foreshadows the end of the play, whether Nora is aware of it or not. ...read more.

However, it allows the audience to see that Nora is becoming more and more aware of how fallible her own situation is, which is an important development in her character. Krogstad's final conversation with Nora and the events that follow serve to increase the pace of the play and of Nora's downfall. The letter in the letter-box is the pivotal factor influencing both Nora's behaviour and the events of Act Three, both understated and hugely significant in its potency. The tarantella is more than a distraction: it is a reflection of Nora's dangerously desperate frame of mind. At the end of the Act, Nora says "Thirty-one hours to live." but it is been made clear that she hasn't the courage for suicide. Therefore, it can be assumed that Nora is referring to the end of the life she has been leading: at this point, it is clear that Nora is still hoping for the "miracle" of Torvald's forgiveness and self-sacrifice, meaning that if he rejects her, she feels she will surely die, again increasing the ambiguity and uncertainty of the ending ?? ?? ?? ?? Chiara Giovanni 12Y ...read more.