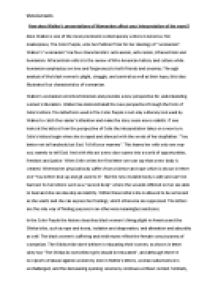 How does Walkers presentations of Womanism affect your interpretation of &quot;The Color Purple&quot;?

﻿Victoria Costin How does Walker?s presentations of Womanism affect your interpretation of the novel? Alice Walker is one of the most prominent contemporary writers in America. Her masterpiece, The Color Purple, wins her Pulitzer Prize for her ideology of ?womanism?. Walker?s ?womanism? has four characteristics: anti-sexism, anti-racism, Afracentrism and humanism. Afracentrism refers to the review of Afro-American history and culture while humanism emphasizes on love and forgiveness to both friends and enemies. Through analysis of the black women?s plight, struggle, and survival as well as their hope, this idea illustrates four characteristics of womanism. Walker's womanism enriches feminism and provides a new perspective for understanding women's liberation. Walker has demonstrated the new perspective through the form of Celie?s letters. The letterform used in The Color Purple is not only a literary tool used by Walker to catch the reader?s attention and make the story seem more realistic. If one looks at the letters from the perspective of Celie the interpretation takes on a new turn. Celie?s letters begin when she is raped and silenced with the words of her stepfather: ?You better not tell anybody but God. ...read more.

In the Color Purple it describes sexism and racism in America and the Olinka tribe. Walker explores the interpretation of anti-sexism and anti-racism consciousness of womanism through the letters. In the letters Walker valiantly and determinedly stands up to the pressure exerted upon her for her endeavour to interpretation and finally eradicate all the iniquity parts of the black world, dedicating the novel to a cause that is the breaking down of all the bondages on the blacks. In letter sixty-two the Olinka think a woman is nothing until she marries and she should stay uneducated as she is inferior to men. This is shown when Nettie was describing the daily life in Africa, ?A girl is nothing to herself; only to her husband can she become something?. Black women in The Color Purple along with black men enjoy no equal rights as whites and even racial segregation is carried on extensively in America. In the south, black people can?t even sit side by side with whites in a car. But it turns out not to be so different even in the northern big cities such as New York, where black people are treated differently from whites as second-class citizens, who are called ?Niggers?. ...read more.

Through description of kindness and beauty of women and redemption of men Walker provides the readers with an ideal living pattern for the human beings which show humanism consciousness of womanism. When Celie and Albert were sewing together in letter eighty-seven Walker advocates the spirit of tolerance where both men and women finally reconcile and accept each other. This shows the theme of liberation and shows that tolerance is a noble human quality and a performance of humanism. Furthermore, this illustrates Walker?s ideal living pattern and her desire to build a harmonious world filled with understanding and love, which is shown in the relationship of Albert and Celie. The Purple Color is a successful literary practice of Walker?s womanism and also is a development of feminism in regard to black feminism. Through supporting of anti-racism, anti-sexism, Afracentrism and Humanism, Walker conclusively sets up an ideal harmonious living pattern by celebrating a unity of men and women in spite of their colour and race. A harmonious relationship between men and women, human beings and society, human beings and nature is the recreation of womanism and also is its true implication. Words: 1,188 ...read more.