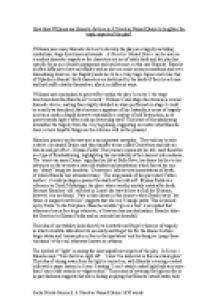 How does Williams use dramatic devices in A Streetcar Named Desire to heighten the tragic aspects of the play?

﻿How does Williams use dramatic devices in A Streetcar Named Desire to heighten the tragic aspects of the play? Williams uses many dramatic devices to develop the play as a tragedy including: symbolism, stage directions and sounds. A Streetcar Named Desire can be seen as a modern domestic tragedy as the characters are not of noble birth and the play has specific focus on a female protagonist and anti-heroine, in this case Blanche. Blanche is often difficult to have an affinity with as she can come across as snobbish and over dramatising however, her fragility leads her to be a truly tragic figure much like that of Ophelia in Hamlet. Both characters are destroyed by the death of their loved ones and both suffer deaths themselves; albeit, in different ways. Williams uses symbolism to great effect within the play. In scene 1 the stage directions describe Blanche as ?a moth?. William?s uses stage directions as a crucial dramatic device, making them highly detailed so when performed on stage it could be exactly as described; they became a signature of his. Instantly, a scene of tragedy is set as a moth is fragile however essentially a creature of self destruction, in its quest towards light it often ends up destroying itself. ...read more.

This symbol is used as foreshadowing. The lantern protects her from the harsh realities of her life and when Stanley rips it off in the final scene she ?cries out? as Stanley has stripped her metaphorically and she is forced into the light, into destruction. Though it is not a literal death it is a death of a sort, perhaps more tragic than that of a literal one. Williams knew personally about death of the mind, as his sister Rose suffered severe mental issues and was later given a full frontal lobotomy. Williams was in fact first going to end the play with Blanche throwing herself under a train, so perhaps he thought that her descent into total madness was more relevant tragedy for a modern age. Blanche is symbolic of illusions whereas Stanley of the truth and realism, these differences causes constant conflict between the two characters as they vie for Stella?s affections, the two cultures can be seen as the metaphor for the play and the battle between the old South and the new industrialising America. Blanche?s desperation for people to believe her lies causes the audience to feel distinct pity towards her whereas before it might have been annoyance at her snobbish attitudes. ...read more.

Later on in the play she says that the music only stops after she hears the gunshot. As Blanche descends into madness the polka plays more and more frequently to symbolise this tragic descent. The polka and the moment it represents are a symbol of Blanche?s loss of innocence, Greys suicide was what prompted her mental decline and since then she hears the tune whenever she begins to slip into illusion and lose grip on reality, hence it playing more often towards the end of the play. Contrastingly, Stanley is represented by the music of New Orleans; Jazz. These different types of music are representative of the respective characters, also of the social and historical situation at the time in that Blanche represents a fading Southern belle, and fading morals whereas, Stanley the ?American Dream?. The play finishes with ?the swelling music of the blue piano? rather than Blanche?s polka; showing how this new America is the future. The same message is embodied in the rape. Together these devices make a truly moving and tragic play in which a descent into madness is the ?death? required in tragedy as a genre. Music emphasises important moments in the play and allows the audience insight into the mind of Blanche. Williams use of symbols is also significant in stressing the tragedy of the play as they foreshadow the unpleasant ending and Blanche?s downfall. ...read more.

This is a very well written essay which makes some intelligent points and cross references the play throughout with 'Hamlet'. Shows knowledge and understanding of play, some social and historical context, accurate use of terminology and discusses theatrical techniques used. Close analysis of language. Quotes from critics would be useful.