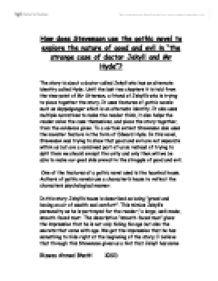 How doesStevenson use the gothic novel to explore the nature of good and evil in &quot;thestrange case of doctor Jekyll and Mr Hyde&quot;?

How does Stevenson use the gothic novel to explore the nature of good and evil in "the strange case of doctor Jekyll and Mr Hyde"? The story is about a doctor called Jekyll who has an alternate identity called Hyde. Until the last two chapters it is told from the view point of Mr Utterson; a friend of Jekyll's who is trying to piece together the story. It uses features of gothic novels such as doppelganger which is an alternate identity. It also uses multiple narratives to make the reader think, it also helps the reader solve the case themselves, and piece the story together, from the evidence given. To a certain extent Stevenson also uses the monster feature in the form of Edward Hyde. In this novel, Stevenson was trying to show that good and evil are not separate within us but are a combined part of us so instead of trying to split them we should except the unity and only then will we be able to make our good side prevail in the struggle of good and evil. ...read more.

In the time period this novel was written there were many fears of using science to try and play God. The Victorians believed you shouldn't try and use science to change, or try and duplicate what God has created. That is why I believe that the monsters that are used in gothic novels of that time period, such as Frankenstein and this story, where creations of scientific experiments in which the scientist tried to play God, have gone awry. In Frankenstein the scientist was trying to create life, and his creation, after taking the lives of those close to him ended up destroying him. In this the scientist tried to split his good and bad side and the bad side ended up consuming the good, and again he killed innocents. I feel another purpose behind this is to say that even if we could play God we don't have the power to control what we might create. Stevenson's monster is a representation of disfigurement and the dark side of society. ...read more.

I feel in this novel Stevenson tries to mimic society by using the split personality of Jekyll and Hyde, which is emphasized by the two entrances to his house, to show the mixed views of people from that time period. He also voiced the fear of most of the society through his monster Hyde, who is created through science but cannot be controlled. I believe not only does he express the fear of science going wrong, he also expresses the view of not playing God, by showing that man might not be able to permanently control what he creates, which is shown by Jekyll loosing control of the transformation to Hyde. He also tries to explain that the good and evil parts of us are what make us who we are and instead of trying to separate them and risk losing control we should embrace them and try through our actions, to let the good side prevail instead of using science to destroy us while trying to do well. ?? ?? ?? ?? Rizwan Ahmed Bhatti 10SD ...read more.