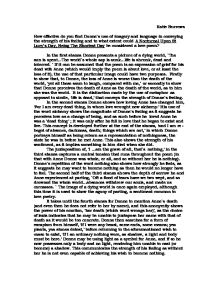 How effective do you find Donne`s use of imagery and language in conveying the strength of his feeling and to what extent could A Nocturnal Upon St Lucy`s Day, Being The Shortest Day be considered a love poem?

Katie Burrows How effective do you find Donne`s use of imagery and language in conveying the strength of his feeling and to what extent could A Nocturnal Upon St Lucy`s Day, Being The Shortest Day be considered a love poem? In the first stanza Donne presents a picture of a dying world, `The sun is spent...The world`s whole sap is sunk...life is shrunk, dead and interred. ` If it can be assumed that the poem is an expression of grief for his dead wife Anne (which would imply the poem is about love, or at least the loss of it), the use of that particular image could have two purposes. Firstly to show that, to Donne, the loss of Anne is worse than the death of the world, 'yet all these seem to laugh, compared with me,' or secondly to show that Donne perceives the death of Anne as the death of the world, as to him she was the world. It is the distinction made by the use of metaphor as opposed to simile, 'life is dead,' that conveys the strength of Donne`s feeling. ...read more.

Donne`s repetition of the word nothing also shows how strongly he feels, as it suggests he may want to become nothing as then he would no longer have to feel. The second half of the third stanza shows the depth of sorrow he and Anne experienced at parting, `Oft a flood of tears have we two wept, and so drowned the whole world...absences withdrew our souls, and made us carcasses. ` The image of a dying world is once again employed, although this time it is used to show the agony of parting, a sentiment common to love poetry. It takes until the fourth stanza for Donne to mention Anne`s death (and even then he does not refer to her by name), and this anonymity shows the power of his emotion, 'her death (which word wrongs her)', as the choice of lexis indicates that he may be unable to juxtapose her name with that of death as it would be too concrete. Donne then searches for a form of escapism from himself, 'If I were any beast, some ends, some means; yea plants, yea stones detest,' before returning to the aforementioned wish to cease to exist, 'If I an ordinary nothing were, as shadow, a light and body must be here.' ...read more.

The poem culminates then on what can be considered the ultimate expression of feeling, as Donne prepares to kill the version of himself present in the poem so he can be with Anne in some form. A Nocturnal Upon St Lucy`s Day could be a love poem as Donne appeared to believe in two kinds of love, physical (of the body) and metaphysical (of the soul). It would be feasible then that Donne would continue to write poetry for his wife even after her body died, as to him she would still be with him in spirit. However I think that if this were a love poem for Anne then Donne would not use deictic pronouns, 'by her death...she enjoys.' The title is also not indicative of a love poem, as a nocturnal is associated with the night and Lucy can be derived from the Latin for light, so this presents a picture of the night intruding on the day, which is not an image that encapsulates a love poem. In conclusion I find Donne`s use of imagery and language in A Nocturnal Upon St Lucy`s Day extremely successful in conveying the strength of his feeling, although I do not believe that it is a love poem. ...read more.