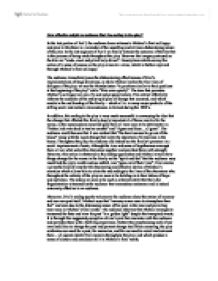 How effective might an audience find the ending to the play?

How effective might an audience find the ending to the play? In the last portion of Act 2, the audience bears witness to Michael's final soliloquy and prior to this there is a reminder of the unsettling and at times disheartening nature of the play. In the last segment of Act 2 we finally witness the outcome of the kite that in the process of being made throughout the play. However the images portrayed on the kite are "crude, cruel and primitively drawn". Descriptions which convey the notion of a sense of unease as the play comes to a close, which is further explored through Michael's final soliloquy. The audience immediately sees the disheartening effectiveness of Friel's implementations of stage directions, as while Michael recites the final lines of dialogue of the play, we see the Mundy sisters "in positions similar to their positions at the beginning of the play" while "Kate cries quietly". ...read more.

The audience could thus see that it was evident that "the heart seemed to go out of the house" along with the rapid change that led to the departure of loved ones in the house. Throughout the play, the audience did indeed see the family's presence in a social imprisonment of sorts, although the love and sense of togetherness amongst them all are what united the characters together and provided them with strength However, this notion is shattered as the ending approaches and Michael reveals how things change for the worse in the family as the "spirit and fun" that the audience very much had the joy to watch and see unfold, was "gone out of their lives". Friel creates a powerful kind of irony by this fascinating and effective device of Michael's narration which allows him to relate the sad ...read more.

Rather than emphasising each of our own inabilities to change the past and prevent change itself from occurring, the play celebrates our need for a past, for memories, and for our need to revisit and reinvent them - all aspects which Friel explores throughout the play, and which produce a sense of closure and conclusion to it in Michael's final words. In conclusion, the final part of Act 2 can definitively be seen as a very effective way to end the play, and through Friel's emphatic sense of anguish and also closure, conveyed, the audience is able to truly feel an emotional resonance with the outcome of the play due to the nature of the characters. The audience can also be left with perceiving the play as an educational and arguably, cautionary tale, in relation the impact of change on people. Furtheremore, ...read more.