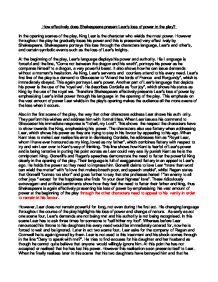 How effectively does Shakespeare present Lear's loss of power in the play?

How effectively does Shakespeare present Lear's loss of power in the play? In the opening scenes of the play, King Lear is the character who wields the most power. However throughout the play he gradually loses his power and this is presented very effectively by Shakespeare. Shakespeare portrays this loss through the characters language, Lear's and other's, and certain symbolic events such as the loss of Lear's knights. At the beginning of the play, Lear's language displays his power and authority. His language is forceful and the line, "Come not between the dragon and his wrath", portrays his power as he compares himself to a dragon, a very powerful beast. It also shows how he can issue demands without a moment's hesitation. As King, Lear's servants and courtiers attend to his every need. Lear's first line of the play is a demand to Gloucester to "Attend the lords of France and Burgundy", which is immediately obeyed. This again portrays Lear's power. Another part of Lear's language that depicts his power is the use of the 'royal we'. He describes Cordelia as "our joy", which shows his status as King by the use of the royal we. Therefore Shakespeare effectively presents Lear's loss of power by emphasizing Lear's initial power through his language in the opening of the play. This emphasis on the vast amount of power Lear wields in the play's opening makes the audience all the more aware of the loss when it occurs. Also in the first scene of the play, the way that other characters address Lear shows his authority. ...read more.

The fact that the other characters feel the need to flatter him stresses Lear's egotism and vanity as well as his lack of wisdom. This serves as a contrast to after he hands over his power to his daughters and begins to be a far more compassionate character. In the final scenes of the play Lear has no power and is able to be imprisoned, however he has gained much wisdom and discarded his vanity. He realises the error of his ways and that he can even find some happiness imprisoned with Cordelia. He also diverts attention away from himself, requesting others to "look there" towards Cordelia. Therefore Shakespeare uses Lear's egotism as another effective device in order to represent Lear's power loss; when Lear loses his power he also loses his vanity. The language and actions of the other characters also depicts Lear's loss of power. After he divides up his kingdom they no longer flatter or fear him due to his lack of power, or even perform his requests. Gonerill "will not speak with him" when he desires it and even instructs her servants to "put on what weary negligence you please" as early in the play as act one scene three. Oswald does not even address Lear as a King or even an individual, merely "my lady's father". This clearly shows the lack of respect even the servants have for Lear as he has lost his power and their allegiance is to his daughters. When Kent is put in the stocks in act two, he complains that as Lear's servant he should not be treated with respect. ...read more.

This line again demonstrates his lack of power as "what they are, yet I know not". When Lear is reunited with Cordelia he does not even recognise her, thinking she is a "spirit". It is only after he realises who she is, that "the great rage...is killed in him". Henceforth, Shakespeare's presentation of Lear's madness is effective in presenting his loss of power as it shows how he has not just lost his power over others but also, more tragically, himself. As well as this, Lear's descent into madness further intensifies the tragedy already felt by the audience, as after Lear loses his power Shakespeare presents him as a compassionate character that the audience is able to feel sympathy for. King Lear very quickly loses his power during the play and Shakespeare presents this incredibly effectively through a variety of techniques such as through his mastery of language and the symbolic importance of events such as the loss of the "hundred knights". However, good does come of Lear's power loss. Without the vast amount of power he had as King, Lear is able to become a far more compassionate person and realise the errors in his ways, allowing the audience to feel sympathy for him and the full extent of Shakespeare's tragedy. When he regains Cordelia, his mind is content and joyful; even without power and having been captured, they will "sing like birds". Through his loss of power Lear gains much, but more tragically than his original losses, these new gains are lost to him with the death of his beloved Cordelia. This event induces his final loss; the loss of his own life. ?? ?? ?? ?? ...read more.

This is a thoughtful essay, which explores the range of linguistic and dramatic techniques Shakespeare employs to convey Lear's loss of power.
The writer moves confidently around the play, making frequent use of brief, well-integrated quotation to support the points made, and creating a sense of genuine engagement with the text.
The use of red font may indicate a desire for emphasis or possibly an alternative draft of a point previously made. In either case it is rather distracting as it interrupts the flow of the essay.
****