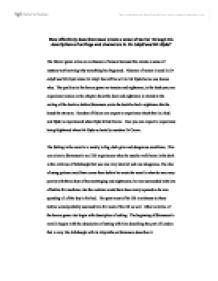 How effectively does Stevenson create a sense of horror through his descriptions of settings and characters in Dr Jekyll and Mr Hyde?

How effectively does Stevenson create a sense of horror through his descriptions of settings and characters in Dr Jekyll and Mr Hyde? The Horror genre relies on an absence of reason because this creates a sense of mystery not knowing why something has happened. Absence of reason is used in Dr Jekyll and Mr Hyde when Dr Jekyll has left his will to Mr Hyde but no one knows why. The qualities to the horror genre are tension and nightmare; in the book you can experience tension in the chapter about the door and nightmare is related to the writing of the book as before Stevenson wrote the book he had a nightmare that he based the story on. Readers of fiction can expect to experience shock that in Jekyll and Hyde is experienced when Hyde killed Carew. Also you can expect to experience being frightened when Mr Hyde so brutally murders Dr Carew. The Setting in the novella is mostly in fog, dark grim and dangerous conditions. ...read more.

"Nothing but a door on the lower storey and a blind forehead of discoloured wall on the upper; and bore in every feature the marks of prolonged and sordid negligence". The technique the author R.L Stevenson has used is personification where he describes the wall as "a blind forehead". By using the word "negligence" the author makes the reader picture this image of the door as awfully neglected and so they lead the reader to sense nervousness in whether it is good or evil that lurks behind the ignored entrance. Stevenson creates a setting for nightmare with his use of description. Stevenson mainly sets the story in the hours of darkness and cleverly uses alliteration and similes to get the image of the various settings he has in his novella. "Glide more stealthily through sleepy houses, or move the more swiftly, even to dizziness, through wider labyrinths of lamp lighted city". Stevenson's cleverly uses alliteration of the words stealthily, sleepy and swiftly. This creates a better image of the setting in the readers mind. ...read more.

This is strange as they is also a vast amount of colours furthermore it suggests on its own something peculiar is going to happen, as the weather is unusual for the time of day. Mr Hyde describes Mr Hyde as a creature of nightmares when the reader first meets him he is described as disfigured. This on it's own suggests horror as you wouldn't expect to find someone like this in any other genre. It suggests an absence of reason, as the author does not explain why Hyde is so severely disfigured. In the incident at the window chapter the writer mainly uses similes and metaphors to make the reader able to once again clearly see for them selves the look of Hyde, as he wanted them to. Which was severely disfigured, strange and incredibly powerful for a man of his stature. This is best seen when the writer writes, "it wasn't like a man it was like a damned juggernaut". This shows the immense power Hyde has which is inhuman and more machine like which then again suggests that this book is a horror story. As before there is an absence of reason to why he has this scary immense power. ...read more.