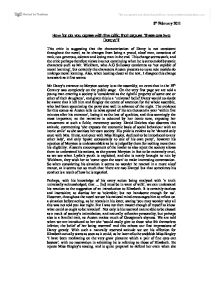 How far do you agree with the critic that argues there are two Darcys?

How far do you agree with the critic that argues 'there are two Darcys'? This critic is suggesting that the characterisation of Darcy is not consistent throughout the novel, as he changes from being a proud, aloof man, conscious of rank, to a generous, tolerant and loving man in the end. This change seems stark, and the critic perhaps therefore views it as not convincing when he is surrounded by static characters such as Mr. Wickham, who A.G Sulloway condemns as 'not capable of moral learning', but certainly the characters Austen presents to us as role models do undergo moral learning. Also, when looking closer at the text, I disagree this change is as stark as it first seems. Mr Darcy's entrance to Meryton society is at the assembly, an event that in the 19th Century was completely on the public stage. On the very first page we are told a young man entering a society is 'considered as the rightful property of some one or other of their daughters', and given this is a 'universal' belief Darcy would no doubt be aware that it left him and Bingley the centre of attention for the whole assemble, who had been speculating the party size well in advance of the night. The evidence for this comes as Austen tells us news spread of his ten thousand a year 'within five minutes after his entrance', listing it as the last of qualities, and thus seemingly the most important, as the narrative is coloured by her ironic tone, exposing her amusement at such a fickle, mercenary society. ...read more.

With such a naturally reserved attitude we see his affection for Elizabeth actually starts as soon as it could, as he later tells the snobbish Miss Bingley 'I have been meditating on the very great pleasure which a pair of fine eyes can bestow', with no reservation in admitting he is referring to those of Elizabeth. He rejects Miss Bingley's teasing, and is quite prepared to defend her even when she walks to Netherfield, a mode of transport 18th Century society would certainly reject for a young woman, alone, by announcing he thought her eyes 'brightened by the exersize'. There is not an unrealistic change in Darcy's feelings towards Elizabeth, it seems it just takes time for him to establish his opinions. Mark Schorer suggests a reason for his apparent pride towards the Bennets, stating 'Darcy can hardly be expected to rejoice in the thought of uniting himself to the rudeness, folly and indolence of the Bennet family', however this is understandable when we look at their treatment of him. At Netherfeild Mrs. Bennet certainly displays 'rudeness', and her lack of intelligence as she gets offended by misunderstanding his comment on the confinement of country society, and goes on to embarrass herself by insulting him as (one of) 'those persons who fancy themselves very important and never opens their mouths', and proclaims that he has 'quite mistake[n] the matter'. ...read more.

His desire for her to know also demonstrates his respect for her rationality, and proves him less proud than first appears. Finally, we must look at the testimony we are given by the housekeeper at Pemberly, as her opinion is weighted by her lifelong knowledge of Darcy. She advertises him profusely, exclaiming 'I have never had a cross word from him ever sine he was four', and insisting this 'no more than the truth'. Though her impression is clearly coloured with loyalty, at this point the reader and Elizabeth are forced to realize Mr. Darcy is not how Mr. Wickham accused him. It also becomes very apparent that at home, he is not at all snobbish towards his staff, and therefore certainly not conscious of the ranks which Austen rejects, yet he appears to cling to at the ball when scrutinised. So we see that without the public stage Austen's society forced on the well off, when Mr Darcy is without intimidation and able to show Elizabeth and the reader proof of his genuine feelings, he never appears different from the loveable Mr. Darcy Elizabeth marries. From his letter, his behaviour around the Bingly sisters and his behaviour at Pemberly we see a genuine, and unprejudiced man no different from the affectionate and caring ma who saves our heroine's family from ruin, then sweeps her off her feet to complete Claire Tomalin's 'dream denouement'. 8th February 2011 ...read more.