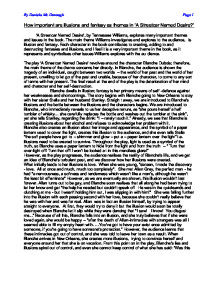 How important are illusions and fantasy as themes in 'A Streetcar Named Desire?'

How important are illusions and fantasy as themes in 'A Streetcar Named Desire?' 'A Streetcar Named Desire', by Tennessee Williams, explores many important themes and issues in the book. The main theme Williams investigates and explores to the audience, is illusion and fantasy. Each character in the book contributes to creating, adding to and destructing fantasies and illusions, and I feel it is a very important theme in the book, as it represents and symbolises other issues Williams explores with the audience. The play 'A Streetcar Named Desire' revolves around the character Blanche Dubois; therefore, the main theme of the drama concerns her directly. In Blanche, the audience is shown the tragedy of an individual, caught between two worlds - the world of her past and the world of her present, unwilling to let go of the past and unable, because of her character, to come to any sort of terms with her present. The final result at the end of the play is the deterioration of her mind and character and her self-destruction. Blanche dwells in illusion; fantasy is her primary means of self-defence against her weaknesses and shortcomings. The story begins with Blanche going to New Orleans to stay with her sister Stella and her husband Stanley. Straight away, we are introduced to Blanche's illusions and the battle between the illusions and the characters begins. ...read more.

I can't make it out...(reading with feigned difficulty) and she also lies about her age: "I call her little in spite of the fact she's somewhat older than I. Just slightly." I think that Blanche constantly lies about herself, to cover up her insecurities and weaknesses, as I have said before, although at times, it is unclear whether or not Blanche believes that her lies are reality, because in the final chapter of the play, she still talks about a "gentleman I was expecting from Dallas... a Shep Huntleigh?" On the other hand though, when Mitch finally confronts Blanche of her lies and deceptions, she tells a heart-wrenching speech, which is sincere and possibly the only time in the play when Blanche lets down her protective guard and tells us how she really feels - "I'll tell you what I want. Magic! ... I don't tell the truth, I tell what ought to be the truth. And if that is sinful, then let me be damned for it!" This is Blanche trying to explain both to Mitch and the audience why she tells lies and has her illusions, and people in the audience can relate to this, as many people do lie about themselves and create fantasies, as they are often much better than having to face the realities of our own lives. ...read more.

The fantasies and illusions also represent the male dominated society of the time in 1947, because Stanley is a dominant male in the book, and plays the role of ripping apart and shattering Blanche's dreams, illusions and fantasies, within the play. This male dominated society and world is also represented in the stage directions of the play, as suggests to the audience that what is happening in the play, echoes reality and what is happening in the outside world too. This is best shown in scene ten, when Stanley rapes Blanche - "A prostitute has rolled a drunkard. He pursues her along the walk, overtakes her and there is a struggle... the NEGRO WOMAN appears and...roots excitedly through...a bag which the prostitute has dropped." However, there are other important themes in the play, which also have to be considered, because illusions and fantasy are not the only issues Williams deals with and raises in the play; there are the issues of death and loss dealt with; the issue of Old and New America conflicting with each other; the idea of a society of men dominating women; violence; opposing backgrounds; loneliness, alcoholism and sexuality, but most of these issues are all dealt with, represented by and can link to illusion and fantasy, so the theme is an extremely important one, within the play "A Streetcar Named Desire". By Daniela Mc Donough Page 1 ...read more.