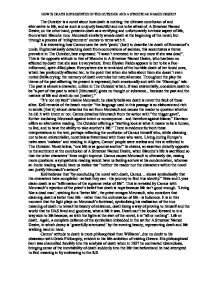 HOW IS DEATH REPRESENTED IN THE OUTSIDER AND A STREETCAR NAMED DESIRE?

The Outsider is a novel about how death is nothing: the ultimate conclusion of and alternative to life, and as such is uniquely beautiful and not to be afraid of. A Streetcar Named Desire, on the other hand, presents death as a terrifying and unfortunately intrinsic aspect of life, from which Blanche runs. Meursault similarly avoids death at the beginning of the novel, but through a process of 'enlightenment' comes to terms with it. It is interesting how Camus uses the verb 'perdu' (lost) to describe the death of Emmanuel's uncle. Euphemistically detaching death from connotations of sadness, this accentuates a theme prevalent in The Outsider, best expressed: "I wasn't interested in her any more if she was dead". This is the opposite attitude to that of Blanche in A Streetcar Named Desire, who has been so affected by death that she sees it everywhere. Even Elysian Fields appears to her to be a Poe-influenced, spirit-filled place. Everywhere she is reminded of the horrible death of her loved ones, which has profoundly affected her, to the point that when she talks about them she doesn't even notice Stella crying: the memory of death overrules her natural senses. Throughout the play the theme of the past affecting the present is expressed, both emotionally and with the 'Flamingo' tale. The past is almost a character, unlike in The Outsider which, if read existentially, considers death to be "a part of that past to which [Meursault] gives no thought or substance... ...read more.

Eventually the streets are 'deserted' and the trams 'almost empty'. Watching the multi-textured layers of humanity disappear one by one 'annoys' Meursault, a metaphor for Camus' struggle with acceptance of impending death. After this, hearing youths cry "their team would never die" seems arrogant and irritating. But only irritating. Blanche, however, is physically sick at the memory of her husband's death. Once more we see how, while Camus suggested death is a concept to affect our minds, Williams believed it affected our everyday lives and physical bodies. Even when Blanche is being accused of immoralities her 'voice has a note of fear' but she is nowhere near as affected as she was by the remembrance of death. Williams even uses Eunice to voice his main belief: 'life has got to go on". Battling on in the face of an unsympathetic society, Williams lived as a drink-dependent homosexual, trying to be accepted for who he was, looking for an improved life. Not, like Camus, acknowledging the ultimate resolution of death: "there is no way out". This theme of being trapped is present in The Outsider from the very start: Meursault has not yet realised death's inevitability, yet the metaphors are abundant. Perez's route represents human life: you can take shortcuts if you wish. You can wear a 'soft felt hat'. Or you can even traverse the 'sticky black tar' of dull despair. Either way, the sun - death - will catch up with you. ...read more.

The Outsider is about Meursault's realisation that death is inevitable and, in a way, good. All his life he allowed nothing to influence him. Then, that day on the beach, the sun got to him. Unable to escape its heat and light, he was irritated that he was unable to control every aspect of himself. And with this irritation came the realisation that not only can he not escape the 'reverberating' heat, but neither could he escape death. He realises that, in the grand scheme of things, it matters not whether this Arab dies now or later. He pulls the trigger, symbolising his acceptance of the inevitability of death, and began to live an enlightened life unto death. A Streetcar Named Desire is about Blanche running from, and ultimate running into, death. Whereas for Meursault light symbolised death, for Blanche it symbolises life and truth. And yet she covered up and was afraid of the light, as her life had been full of death. She felt trapped by inevitability, and she ran from it: "I don't want realism!". She hid until the shadows were stripped away. Camus strips away shadows in The Outsider too, in keeping with his lifelong policy of pursuing truth. For Meursault this revelation is good: death is good. Williams, however, suggests (by removing Blanche at the end of the play) that perhaps it's wiser to cover up the truth - death - and in return gain an easy life. HOW IS DEATH REPRESENTED IN THE OUTSIDER AND A STREETCAR NAMED DESIRE? HOW IS DEATH REPRESENTED IN THE OUTSIDER AND A STREETCAR NAMED DESIRE? ...read more.