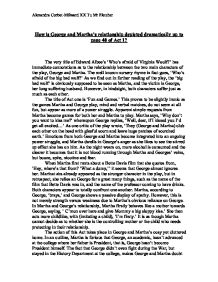 How is George and Martha's relationship depicted dramatically up to page 48 of Act 1?

How is George and Martha's relationship depicted dramatically up to page 48 of Act 1? The very title of Edward Albee's 'Who's afraid of Virginia Woolf?' has immediate connotations as to the relationship between the two main characters of the play, George and Martha. The well known nursery rhyme in fact goes, 'Who's afraid of the big bad wolf?' As we find out in further reading of the play, the 'big bad wolf' is obviously supposed to be seen as Martha, and the victim is George, her long suffering husband. However, in hindsight, both characters suffer just as much as each other. The title of Act one is 'Fun and Games.' This proves to be slightly ironic as the games Martha and George play, mind and verbal matches, do not seem at all fun, but appear as more of a power struggle. Apparent simple requests from Martha become games for both her and Martha to play. ...read more.

The action of this Act takes place in George and Martha's cosy yet cluttered home. In an outline, Martha is furious that George, an academic, hasn't advanced at the college where her father is President, that is, George hasn't become President himself. The fact that George didn't even fight during the War, but stayed in the History Department at the college, makes George and Martha doubt his manhood all the more. In a sense, George almost feels below Martha's father. Understandably so, as Martha calls him a 'flop' and continues to praise her father. George and Nicks (the slightly self contained younger guest) chosen departments in the college are again an example of total contrast in the play. George appears to be bogged down in his department and not going anywhere academically or in his career. He is almost a relic of the past himself. Nick, however, is at the forefront of new discoveries and is also young, handsome and extremely successful. ...read more.

The supposed perfection of the boy, blonde hair and blue eyes, and the fact that George refers states, 'Don't bring up the bit about the boy,' depersonalises and deludes his actual existence. This is obviously a particularly sore point of conversation between George and Martha, as it results in a number of heated arguments. Martha and George constantly hurl abusive and hurtful words at each other, as though throwing knives. In striking out at those closest to them, that is each other, they represent the typical dysfunctional couple. However, in doing so the romantic notion of love keeps their relationship almost together. Both saw each other as the way to a new, 'perfect' way of life yet the fantasy was not fulfilled, and in verbally abusing each other, they take the blame from themselves and place it on each other. Albee has captured perfectly the way two completely different people can come together and the dramatic consequences it can have on each other, not always in bringing out the negative. Alexandra Corbet-Milward XX Tu Mr Fletcher ...read more.