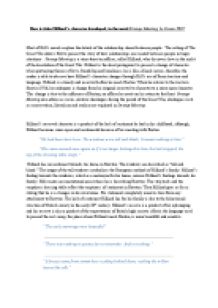 How is John Hilliard's character developed, in the novel &quot;Strange Meeting&quot; by Susan Hill?

﻿How is John Hilliard?s character developed, in the novel Strange Meeting, by Susan Hill? Most of Hill?s novels explore the details of the relationship shared between people. The setting of The Great War allows Hill to present the story of how relationships are created between people in tragic situations. Strange Meeting is a story about an officer, called Hilliard, who discovers love in the midst of the desolation of the Great War. Hilliard is the ideal protagonist to present a change of character when portraying themes of love, friendship and loneliness; he is like a blank canvas, therefore the reader is able to observe how Hilliard?s character changes through Hill?s use of form structure and language. Hilliard is a lonely and reserved before he meets Barton. When he returns to the western front in 1916, he undergoes a change from his original reserved to character to a more open character. This change is due to the influence of Barton, an officer he meets on his return to the front. Strange Meeting also addresses socio ?historic ideologies during the period of the Great War, ideologies such as conservatism, liberalism and realism are explored in Strange Meeting. Hilliard?s reserved character is a product of the lack of sentiment he had in his childhood, although, Hilliard becomes more open and sentimental because of his meeting with Barton. ?He had been born here. The windows were tall and blank. ...read more.

Events begin to occur without much deviation from the plot of the story as a whole. Hill?s use of anadiplosis: strings together sentences, and allows themes to continue throughout the novel. The structure becomes more restricted and in the same way Hilliard restricts the expression of his emotions. In this way Hilliard?s character as a whole is ambiguous throughout Strange Meeting; he opens up and he also to remains reserved. Hilliard instantaneously reacts to Barton?s open personality. Hilliard feels uncomfortable when he meets Barton for the first time because the way he speaks about his feelings is very peculiar to him. In the society Hilliard grew up in, it is strange for someone to voice their feelings. Hilliard feels that it is fine to think about his feeling but not to voice them. ?To tell you the truth, I was frightened to death of you!? ________________ The way Barton speaks credits his unreserved character. He draws Hilliard into his conversation. He holds the subject of his sentence; his fear of Hilliard, away from Hilliard and the reader alike. He draws both the reader and Hilliard into his company by creating a need to learn more from him. Barton immediately draws Hilliard into a realm of honesty and safety when he says ?to tell you the truth?. Then Barton shifts the mood of the novel when he says ?I was frightened to death of you.? Barton gives an emotive account of himself in the first meeting he has with Hilliard, an emotive account of which Hilliard shares but unlike Barton he will not utter it. ...read more.

Hilliard?s desire for intimacy is provoked by the temporal loss of his highly valued friend, Barton. Hilliard?s strategy is product of his adopting Barton?s understanding, open nature. The change in Hilliard?s character is representative of the rapid change in British society, following the end of the Great War. Upper classed officers began to mix with the lower class ensigns, during the war effort. The two class?s endured hardships together and through this friendship between men of different classes began sprout. The upper class and lower class were brought together through events such as memorials for their fallen comrades. The class boundary was not broken; though slight cracks were made within it as the Great War encouraged members of different class?s to mix for the war effort. In conclusion Hill presents Hilliard?s character through Barton?s introduction into the novel. The reader is able to compare Hilliard?s manner with Barton?s, and throughout the novel, the difference between the two begins to diminish. Hilliard, upset by the lack of intimacy at Hawton, seeks solitude from intimate friendships, although, when he befriends Barton, he begins to value friendship, and at the loss of it he develops a desire for intimacy, in the same way Barton desires to be intimate with Hilliard in their first meetings. Hilliard?s character change is also be presented through Hill?s use of language, the reader begins to see traits of Barton?s expressiveness of speech in Hilliard?s speech. Also Hill uses imagery to present the beauty in the discovery of Hilliard?s new friendship and also to present the coldness of his home in Hawton. ...read more.