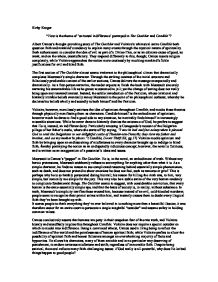 &quot;How is the theme of 'universal indifference' portrayed in The Outsider and Candide&quot;?

Kirby Kruger "How is the theme of 'universal indifference' portrayed in The Outsider and Candide"? Albert Camus's thought-provoking story of The Outsider and Voltaire's whimsical satire Candide both question faith and mankind's tendency to explain away events through the mystical nature of spirituality. Both authors seem to consider the idea of evil as part of a Divine Plan, or as an ultimate cause of good, as weak, and on the whole, unsatisfactory. They respond differently to this, though; Camus rejects religion completely, while Voltaire approaches the notion more cautiously by mocking mankind's fickle justifications for evil and blind faith. The first section of The Outsider almost seems irrelevant to the philosophical climax that dramatically completes Meursault's simple character. Through the striking contrast of the initial structure and fallaciously predictable content of the earlier sections, Camus delivers the message unexpectedly and dramatically. As a first-person narrative, the reader expects to finish the book with Meursault sincerely narrating his unremarkable life as he grows accustomed to jail; yet the change of setting does not really bring upon any renewed interest. Instead, the subtle introduction of the Patrician, whose irrational and blatantly irritable beliefs eventually annoy Meursault to the point of an philosophical outburst, whereby he declares his beliefs wholly and soundly to both himself and the Patrician. ...read more.

Humorous as is, it has the potential of tempting a reader into considering the possibility of God being indifferent to human affairs. The mention of the Lisbon earthquake in Chapter 5 is reminiscent of Voltaire's Po�me sur le d�sastre de Lisbonne, which he wrote in honour the actual Lisbon earthquake in November, 1775. This event played a major part in his life, and it provided him with indisputable proof that "all is well" was absurdity; it disgusted him to think that thinking men were under the guidance of a benevolent and concerned deity who would reward the virtuous. Therefore, the mention of the earthquake is a subtle, yet malicious, attack on believers of God and Optimism; 30 000 people died in the event, and that, to Voltaire, is proof that any Higher Power is completely indifferent to mankind and wellbeing. Candide employs a mixture of Horatian and Juvenalian satire; it jests at human folly and lashes out at human evil and corruption. Voltaire makes use of gross exaggeration, euphemisms and repetition in order to effectively drive his message through - it becomes so repetitive and unrealistic that it simply can't be ignored. Pangloss's tired old doctrine, "All is for the best", is constantly met with ironic contradiction, and a common form of irony is Voltaire's use of understatement in reference to tragedies and misfortune. ...read more.

Voltaire does not even reward the wealthy and fortunate characters with happiness; the Count Pococurante, a wealthy Venetian, is bored with life and unfailingly critical; Brother Girofl�e is a miserable monk who does not even find happiness after Candide's generous monetary donation. Voltaire is convinced that life is wrought with hurt and disappointment, and deserves no optimism or sacrifice, as the shortcomings of life vastly outweigh the benefits. There is, according to him, no point in praying to any sort of deity to end one's own petty troubles, because any form of Higher Power is completely indifferent to the lives and wellbeing of individual people. Camus's own view largely overlaps this, however, he is not particularly passionate in rejecting the theory of optimism, and does not share Voltaire's idea that God is a detached and pitiless being. Camus is an atheist, and rather than weeping for the evil of the world and satirising hope and belief, calmly denounces religion and the overwrought concept of human faith as a completely fabricated, useless value, and that humans waste far too much time trying to understand their own petty values and non-existent forces around them. Conclusively both writers are ardent in their allegation that, despite man's own inflated sense of self-importance, no greater force has anything to do with us at all, and that we are, with the possibility of a great Creator included, profoundly and universally alone. ...read more.