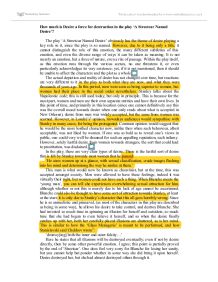 How much is Desire a force for destruction in the play 'A Streetcar Named Desire'?

How much is Desire a force for destruction in the play 'A Streetcar Named Desire'? The play 'A Streetcar Named Desire' obviously has the theme of desire playing a key role in it, since the play is so named. However, due to it being only a title, it cannot distinguish the role of this emotion, the many different subtleties of this emotion, and even the diverse range of ways it can be taken as meaning. It is not merely an emotion, but a force of nature, even a rite of passage. Within the play itself, as this emotion runs through the various scenes, no one threatens it, or even particularly acknowledges its very existence; yet, if it is not mentioned, then it should be unable to affect the characters and the plot as a whole. The actual depiction and reality of desire has not changed over time, but reactions are very different to it in the play to both what they are now, and what they were thousands of years ago. In this period, men were seen as being superior to women, but women had their place in the social order nevertheless. Stanley talks about the Napoleonic code; this is still used today, but only in principle. This is because for the most part, women and men are their own separate entities and have their own lives. ...read more.

You also cannot be sure what love is classified as; Stella believes with her heart that it is, but a modern audience would surely be more sceptical of this claim. Her desirous love for Stanley has destroyed her chance of having a future as anything but a housewife in a small, cramped little flat in the middle of downtown New Orleans, since they create a child by the end of the play. Stella cannot leave without suffering prejudice and being stigmatised for the rest of her life; attitudes towards single mothers are very different to how they are now. In the modern day, the play is said to be an early example of women's rights improving. Megan Terry3 also agrees this play would strike a chord with modern audiences, as well as those of the time. 'Streetcar was a necessary addition... emotionally. It is a feminist play.' Not only has her future been destroyed by her desire for Stanley, but also her chance of having a peaceful life; Stanley is an 'animal thing' and occasionally strikes Stella. Nowadays this is unheard of, but then, according to Eunice, this happens often: 'There's nothing to be scared of. They're crazy about each other.' Desire can lead to the destruction of safety, a future, but worst of all, it leads to Stella being stranded towards the end of the play; she does not know whether to believe her sister or her husband. ...read more.

Death is the finality to life, and can be considered the exact opposite of desire. Whilst desire in the dictionary definition tries to create life and bring happiness on earth, death takes away life and can cause both unhappiness, and an end to being on earth. Death can not only mean the literal sense as in towards animate life, but also towards imagined fantasies; Blanche's illusions are brutally destroyed before her eyes, hastening her final descent into what you hope is madness, not consciousness. Her whole persona and almost her entire being are gone while still living; she has lost her new love, her freedom, her friends, family, beauty and her life. This destruction cannot be dismissed because it is not desire, but it is not desire. Londr�6 says that the move from desire to death is 'metaphorical', however I disagree; I think that in this play, the change is not metaphorical but physical. Death and desire are the two main themes of the entire play. Both of them are destructive, but both are necessary in life to life. Desire has far many more ways in which it can destroy life, but death is the final way. Nevertheless, desire is present from the beginning to the end of the play, and although it does not destroy everything, everything that it does touch is irreparably changed, so I believe that desire is the most destructive force in the play. ...read more.

The writer has clearly researched the subject, but could use context more specifically and less vaguely. Similarly, while this is an articulate, expressive essay, waffle should be avoided and the argument should be kept sharply relevant. ***