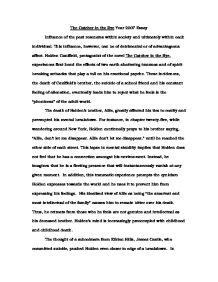 The Catcher in the Rye Year 2007 Essay Influence of the past resonates within society and ultimately within each individual. This influence, however, can be of detrimental or of advantageous affect. Holden Caulfield, protagonist of the novel The Catcher in the Rye, experiences first hand the effects of two earth-shattering traumas and of spirit breaking setbacks that play a toll on his emotional psyche. These incidences, the death of Caulfield's brother, the suicide of a school friend and his constant feeling of alienation, eventually leads him to reject what he feels is the "phoniness" of the adult world. The death of Holden's brother, Allie, greatly affected his ties to reality and preempted his mental breakdown. For instance, in chapter twenty-five, while wandering around New York, Holden continually prays to his brother saying, "Allie, don't let me disappear. Allie don't let me disappear," until he reached the other side of each street. This lapse in mental stability implies that Holden does not feel that he has a connection amongst his environment. ...read more.

The fantasy in which he describes reflects again his volatility and bitterness that the world has left him to fall over the cliff into adulthood alone. Unfortunately, Holden's inability to cope with adult situations has caused him to force himself back into a child-like mindset where the world and everyone around him is unfit unless they correspond to his vision of correct. Holden's distorted view of the world forces him to undergo feeling alienated and ostracized. As a result, his estrangement causes him to feel lonely and in turn, he seeks out situations to overcome his loneliness and depressed moods. One such plight is his date with Sally Hayes, an attractive girl whom Holden has known for a long time. In chapter seventeen, he says, "I felt like marrying her the minute I saw her," and then ricochets from annoyance to attraction as he suggests a farfetched plan where they run away from their lives, in New York, to a cabin. After Sally rejects his offer Holden's callous response reveals, once again, that he is ill equipped to make any level of connection with people. ...read more.

Moreover, Holden's possible homosexual encounter with Mr. Antolini, his former teacher, in chapter twenty-four, fosters his fear of adult themes by leaving him shaken and confused. As with everything else in his life Holden is unable to handle, what he feels just happened so he jumps to conclusions and loses all trust and faith he once had for his teacher. These rash actions prove that he needs to maintain an oversimplified view of the world in order to sustain any sense of the stability he has left. The traumatic events of Holden Caulfield's life are of detrimental effect to his mental stability. The death of both his brother and schoolmate causes him to feel he must protect the innocence and purity, which is childhood, from the disillusioned and often bewildering decent into adulthood. This fantastic job, "the catcher in the rye," is all Holden aspires to be because he resents that he is free falling into adulthood without anyone to "catch" him. As a result, he is unable to interact and connect with people or in adult situations, calling them phony and superficial. Holden lacks the ability to accept reality as a whole and consequently inches closer to his imminent breakdown. ...read more.