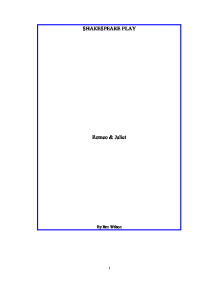 SHAKESPEARE PLAY Romeo & Juliet By Ben Wilson How Shakespeare presents Romeo & Juliet's early relationship (Up to Act II, Scene II) Shakespeare presents Romeo & Juliet's early relationship as a love-hate affair. By this I mean that although they love each other immensely, they are surrounded by the hate of their two families. You see the hate of the two families from the outset, as you will see in this essay. In my essay I will be looking at what Shakespeare has done to make us see Romeo & Juliet in a certain way. I am also going to look at the reason for the chorus; The set up of the scenes; Shakespeare's use of comparisons; his use of language; why Shakespeare uses Rosalind and Paris in the early part of the play; Romeo & Juliet's first meeting and that famous 'Orchard Scene.' Romeo & Juliet is thought to have been written between 1594 and 1596, and was written by the literary genius, William Shakespeare. William Shakespeare was born in 1564 in the small town of Stratford-upon-Avon, and was educated at the local Grammar school, but surprisingly he did not go to university. Shakespeare has presented Romeo & Juliet in a very particular way in the play, so we can see the way they change when they meet for the first time. Shakespeare has presented Romeo to us, in the early scenes of the play, as a wimpy and soppy young man, mopping over a woman. ...read more.

And then there are the comparisons that add to the romanticism of the play, and the love that Romeo & Juliet share together. Shakespeare uses language to his advantage. He has a firm grasp of the 'old English' language as you will see in all of his plays, sonnets and poetry. Shakespeare's plays are mainly written in 'blank verse,' which is the form preferred by most dramatists and this is especially true to Romeo & Juliet. Shakespeare has used language very emotively. He is trying to get the readers emotions going while reading the text. He also uses language to try and make the readers think. Shakespeare makes you think of distinctions between feelings and responses that can be adjudged as 'real,' or 'true,' or 'natural.' This is especially true to the early scenes in the play. For example, looking at Benvolios speech (I.I.118-130), it begins with a reference to the sunrise- 'the worshipped sun/ peered forth the golden window of the east.' This is full of imagery and puts strong images in your mind. You find this sort of striking imagery throughout the play. The language of Shakespeare, and the way he uses it, draws the readers in. It draws your heart and emotions, along with your brain, and the reader gets totally caught up in the text. Shakespeare has also included many sonnets throughout the play, for which he is very famous for writing. ...read more.

Shakespeare has done this partly to show that they have to rush to get married because of the hate of the two families, also to show the great love they share together. Also it is because around the time that Shakespeare wrote the play (1594-1596), that was the philosophy of most of the people. There is another element that contributes to the rush to get married; being Juliet's arranged marriage. As Juliet accepts the marriage proposal, and she did not have a view to getting married, it shows us that this is the real thing, this is 'real love.' Shakespeare tries to get across the point that this marriage should not happen, and that it will bring problems throughout the relationship. Showing the love-hate theme of the play. In conclusion I would say that Shakespeare has shown us the love-hate situation of the play, and has presented Romeo & Juliet's early relationship in a planned and very particular way. He has shown us how easily Romeo falls in love, and how hard it is to get Juliet to fall in love. He has shown us the hate of the two families and the problems this would cause in their later relationship. He has shown us that love conquers hate, as the two get together regardless of the consequences. So, we have to ask ourselves, is it worth all the risks and problems of the hate surrounding you to get involved with someone from the family that is your enemy? And, does it take the death of your only children to solve an age-old feud? I'll leave these up to you. 1 1 ...read more.

This student has answered the question mostly successfully and has used evidence from the text and has commented on this evidence. At times the answer has diverted away from the original question. It's important to always remember the 'big' question.
***