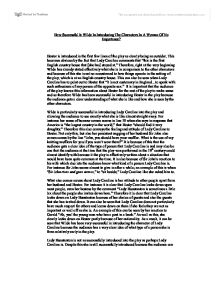 How Successful Is Wilde In Introducing The Characters In A Woman Of No Importance?

How Successful Is Wilde In Introducing The Characters In A Woman Of No Importance? Hester is introduced in the first few lines of the play as clearly being an outsider. This becomes obvious by the fact that Lady Caroline comments that "this is the first English country house that [she has] stayed at." Therefore, right at the very beginning Wilde has already stated effectively what she is in comparison to the other characters and because of this she is not so accustomed to how things operate in the setting of the play, which is at an English country house. This can also be seen when Lady Caroline has to point out to Hester that "it is not customary in England...to speak with such enthusiasm of any person of the opposite sex." It is important that the audience of the play knows this information about Hester for the rest of the play to make sense and so therefore Wilde has been successful in introducing Hester in the play because the audience gets a clear understanding of what she is like and how she is seen by the other characters. Wilde is particularly successful in introducing Lady Caroline into the play and allowing the audience to see exactly what she is like almost straight away. ...read more.

the young man who has a post in a bank." As well as this, she clearly looks down on Hester partly because of her nationality. As a result, it can be seen that Wilde has been very successful in introducing the character of Lady Caroline because the audience has a very clear idea of what type of a person she is from relatively early in the play. Lady Hunstanton is not as successfully introduced into the play as perhaps Lady Caroline is. Despite this she is still successfully introduced because the audience can still gather a relatively clear idea of what she is like. It is clear that she is not as pompous as Lady Caroline. This can be seen by the way that she has invited some people such as Gerald Arbuthnot to her house and so she is more accepting of people from a different background and class that her, this is also shown by Gerald "is quite a prot�g� of [hers]" Lady Hunstanton is presented as the hostess and Wilde portrays this very well. This is because she seems to be the character who organises things - "I will write and tell her about it, and ask her to come up and meet him." ...read more.

Wilde introduces Gerald Arbuthnot as clearly being from a different class and social position than most of the other characters in A Woman Of No Importance. This is made clear by the fact that he works "in a bank" as Lady Caroline points out. It is clear that the other characters and in particular Lady Caroline seems to look down upon him, even if it is not their intention. Wilde successfully introduces Gerald to the audience by showing exactly what his new jobs means to him - "it means everything to me- things that were out of the reach of hope may now be within hope's reach." Therefore this shows that he may want to better himself and maybe even become on a level with Lord Illingworth. Therefore it can be seen that Wilde is very successful in introducing the characters in A Woman Of No Importance because on some occasions he allows the audience to know what they are like without them even appearing in the first few pages. This is done largely through descriptions and attitudes to them by the other characters. I think that the character that Wilde most successfully introduces into his play is Mrs Allonby. This is because she is described so well by the other characters that the audience knows even before she appears exactly what kind of a person she is and also what the other characters, particularly Lady Caroline think of her. ?? ?? ?? ?? ...read more.