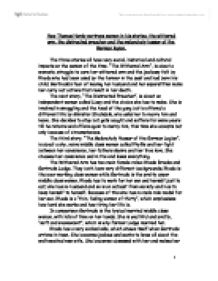 How Thomas Hardy portrays women in his stories, the withered arm, the distracted preacher and the melancholy hussar of the German legion.

How Thomas Hardy portrays women in his stories, the withered arm, the distracted preacher and the melancholy hussar of the German legion. The three stories all have very social, historical and cultural impacts on the women of the time. "The Withered Arm", is about a woman's, struggle to cure her withered arm and the jealousy felt by Rhoda who had been used by the farmer in the past and had born his child. Gertrude's fear of loosing her husband and her superstition make her carry out actions that result in her death. The next story, "The Distracted Preacher", is about an independent woman called Lizzy and the choice she has to make. She is involved in smuggling and the head of the gang but is offered a different life by Minister Stockdale, who asks her to marry him and leave. She decides to stay but gets caught and suffers for some years till he returns and offers again to marry him, this time she accepts but only because of circumstances. The third story, "The Melancholy Hussar of the German Legion", is about a shy, naive middle class woman called Phyllis and her fight between her conscience, her fathers desire and her true love. She chooses her conscience and in the end loses everything. The Withered Arm has two main female roles: Rhoda Brooks and Gertrude Lodge. ...read more.

My whole life ha' been passed in this way." She needs to stay in Nether-Moynton where the adventure is and not do what normal females do. Later we see Lizzy's resolve deteriorates; she needs Stockdale because the money earnt from smuggling runs out. After all her talk about needing smuggling and it being fine to do it, she says it wrong, "I own that we were wrong, said she. But I have suffered for it: I am very poor now," Lizzy wants Stockdale now she is poor and worthless and Stockdale offers to take her away from her poverty. Lizzy gives in and takes this offer, then settles down to the married life she once hated the thought of living because of its lack of adventure and predictability. This ending is problematic as Lizzy changed her attitudes totally. This ending was also added for the readers. The story was published each week in a magazine. Hardy wrote the ending to please the audience and give them an ending most women would of taken. There is an alternative ending to this story that isn't so problematic. This is that Lizzy would have married Owlett a member of the smuggling gang and immigrated to America. The Melancholy Hussar of the German Legion has one main female role, that of Phyllis Grove an attractive middle class young lady. ...read more.

This all made me very sympathetic towards Gertrude and I know how if feels to be superficially stereotyped. She never did anything to Rhoda and died as a consequence to Rhoda's jealousy. I also sympathise with Phyllis because men ruined her life, her life was ruined by the society's strict rules at that time to do the right thing and marry for position and money, and the shooting for desertion of her true love. Men have a great impact on women and can make our lives fun, yet some men make our lives more misery than fun. In my opinion Hardy portrays women with respect, he makes them strong and independent, manly in a sense. In the early 1800s women all had their places in the world, which was in the home. Hardy brought these women out of their world and into the beginning of our not so sexist England today. Men and Society had the main impact on women of this era; I believe this is why Hardy's stories were loved in this age. Women could read them and think that they had a greater role in this era and they were more intelligent than men thought. I also believe men should have read these books to see how independent and important women are to this world. It was very important for women of this era to get their thoughts and strengths across to the world, so they could begin to live as equals to men. 1 ...read more.