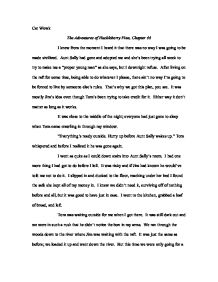 Cat Wowk The Adventures of Huckleberry Finn, Chapter 44 I knew from the moment I heard it that there was no way I was going to be made sivilized. Aunt Sally had gone and adopted me and she's been trying all week to try to make me a "proper young man" as she says, but I downright refuse. After living on the raft for some time, being able to do whatever I please, there ain't no way I'm going to be forced to live by someone else's rules. That's why we got this plan, you see. It was mostly Jim's idea even though Tom's been trying to take credit for it. Either way it don't matter as long as it works. It was close to the middle of the night; everyone had just gone to sleep when Tom came crawling in through my window. "Everything's ready outside. Hurry up before Aunt Sally wakes up." ...read more.

But this time we were only going for a short while on the river. At the first sign of daylight we were to pull off to the side, ditch the raft, and make our way westward. As I was getting onto the raft, Jim noticed the box in my hand. I explained that it was all my money, incase we ever needed it, incase of emergencies. Jim wasn't happy about it, but said it was too late to do anything about it now anyways. Tom on the other hand was in astonishment and thought it was a brilliant idea. So we headed off down the river. None of us got much sleep that night on account of Tom talking the entire time about what our next plan should be. I recon Jim wasn't really listening to him anymore than I was on account of neither of us saying anything back. When the sun came up we pulled to the bank of the river and started putting everything in sacks for us to carry. ...read more.

We's didn't have any before and we's don't need any now. Besides, sooner or later someone was to come and steal it from us anyways." "I guess you're right, we can do without it." I unwillingly agreed. "We can do without it? We's better off without it, and we's better off without Tom. It's just the two of us, just like before." This time I had to agree, after all he did have a point, it had always been the two of us and it always will. "We are better off! Just you and me, no Tom, no Aunt Sally, no kings, just you and me. You're my best friend, Jim," A huge smile came across Jims face as I said that, and I realized it was possibly the nicest thing anyone has ever said to him. We got our things and headed off to the west. We weren't too sure on where we was going, but we went anyways. After all, it didn't matter, we could do whatever we's wanted to. ...read more.